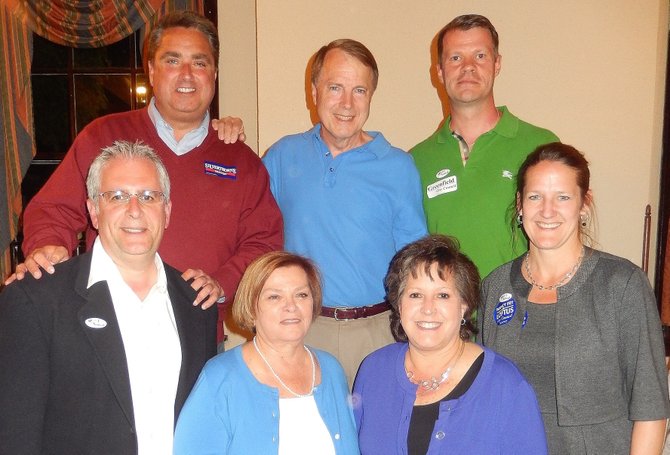 Tuesday, May 6, was a great night for incumbents and women in the City of Fairfax. Mayor Scott Silverthorne and all four current City Council members were re-elected, and two women replaced the two men – Dan Drummond and Steve Stombres – who’d stepped down from the Council.

“It’s a resounding victory and a clear indication that the voters think we’re moving in the right direction,” said Greenfield. “They clearly picked the team they feel will continue to protect our small-town character while moving our city forward.”

ALL THE CANDIDATES gathered in the Old Town Hall to await the results, along with Fairfax County Board of Supervisors Chairman Sharon Bulova, Sen. Chap Petersen (D-34), Del. David Bulova (D-37) and County Sheriff Stacey Kincaid.

Addressing the crowd afterward, Silverthorne said, “From the bottom of my heart, thank you. This was a hard-fought campaign and people knew where everybody stood on the issues.”

He said he felt “overwhelmed by the tremendous confidence and trust the public’s placed in me. I’ve been blessed with a talented, collaborative City Council and I’m optimistic we’ll be able to work on the many challenges we face as a community.”

Silverthorne attributed his re-election to his openness, accessibility and responsiveness to the citizens. And, he added, “The public sensed that we’ve had a good team in place, the past two years, and didn’t see any convincing reason to switch horses.”

Elected to his 11th term, Greenfield became the longest-serving and most-experienced councilman in City history. “I think experience matters,” he said. “And I’ve got a proven track record as someone who’ll continue providing high levels of service at the lowest tax burden possible.”

Schmidt, entering her third term, said it’s an honor to serve the City. “The future is bright and I’m happy to be a part of it,” she said. “I grew up here and have been involved in Fairfax most of my life, working with many different citizens on various boards and committees. And campaigning, I knocked on lots of doors.”

Welcoming former School Board Chairman Miller to the Council, Silverthorne said, “She’s served this community over 40 years, not just on the School Board, but as a tireless advocate for youth sports. She has a distinguished record unmatched by anyone in this room.”

Miller said voters appreciated the time and effort the candidates put into the community. After almost three decades on the School Board, she wanted a new challenge. And with some big projects moving forward, she said, “It’ll be an interesting time to be on the Council. I pledge to work hard, continue listening to the community’s concerns and provide good constituent services.”

CALLING THE ELECTION “truly remarkable,” Meyer said, “People have given up their lives to vote, so we shouldn’t take it for granted.” Congratulating his Council colleagues, he said, “I hope we’ll move forward with a unity of purpose and focus for the greater good of the next generation.”

Loftus said she made many new friends while campaigning and looks “forward to serving on this Council.”