Service dogs and their “handlers” are teamed up through paws4people. 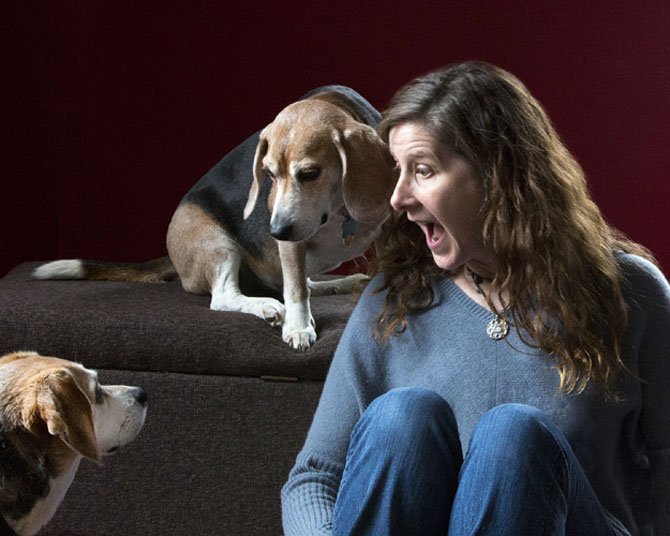 Joan Brady with her beagles Fred and Hank. Photo by Joan Brady 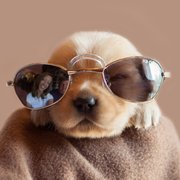 I was already one of those embarrassingly crazy dog people, when I first met Kyria and Terry Henry, founders of paws4people.org. But I had no idea how little I truly knew about the bonds possible between animals and their people. After photographing puppies coming home for the first time, dogs sharing their favorite pastime and pets who are older and/or ill, I really thought I knew all about the animal/people connection.

I was already one of those embarrassingly crazy dog people, when I first met Kyria and Terry Henry, founders of paws4people.org. But I had no idea how little I truly knew about the bonds possible between animals and their people.

After photographing puppies coming home for the first time, dogs sharing their favorite pastime and pets who are older and/or ill, I really thought I knew all about the animal/people connection.

But nothing prepared me for the emotional bonds that I began to capture for paws4people.org of dogs and the “handlers” who are the paws4people clients.

These were assistance dogs, trained to provide support in mobility, psychiatric service, educational and rehabilitative assistance, and social therapy. The dogs’ training is done largely in prisons by inmate trainers.

Children and adolescents, veterans and active-duty service members who are accepted into the program, meet with trainers and dogs at the prisons (called a “bump”), in hopes that there will be a match between each of them and a dog. When a match is found, the dog is trained specifically to the needs of his/her new “handler.”

If you have ever tried to photograph your pet, you know it requires patience, a quick finger on the shutter and fast equipment. Capturing the relationship between assistance dogs and their handlers, is something altogether different.

It’s about capturing the intimacy of two beings who live largely for each other. As a photographer, that means creating the right environment, without intruding too much on the moment.

Here are a few of the pairs I have photographed, and a little bit about each.

SONNY MORROW, of Alexandria, stepped on a land mine while serving in Vietnam. As he has aged, the injuries he sustained have continued to limit his activities and those of his wife, Peggy.

When Sonny went to West Virginia for his “bump” at FCC Hazelton, four years ago, he didn’t know what to expect. Sonny was introduced to two dogs, one by one. Each dog took one look at him and walked the other way. Sonny had heard that you don’t pick the dog, the dog picks you. And he wasn’t getting picked.

Another dog, Jake, a black lab, was not felt to be ready to meet any of the “clients.” Maybe it was the way he looked at Sonny from across the room, maybe it was just a gut feeling, but it was decided that Jake should meet Sonny. Within seconds, Jake was upside down in Sonny’s lap and it was clear they were meant for each other.

Sonny gives Jennifer, Jake’s lead trainer, a great deal of credit for thoughtfully questioning him that day on what he was going to need from his assistance dog and then making sure that Jake had the training that would allow him to meet his specific needs. They remain close friends to this day.

Sonny can’t imagine his life without Jake. Jake is not only a caring constant companion, but his practical skills are critical to Sonny’s well being. Jake is able to call 911 if Sonny gets into trouble and helps Sonny with his mobility and stability. Sonny describes Jake, with great pride, as being able to do absolutely anything.

DAWSON HAS BEEN WITH RACHAEL WESSELL about a year now. He helps her with daily tasks like picking up dropped items, alerting her when someone is approaching her wheelchair from behind, helping her to balance when she needs to right herself, carrying bags, getting out her wallet or cell phone, getting help in an emergency. He is able to remove her socks and coat and will even bring her a hot pizza without scarfing it down himself. He lives for Mondays when Rachael rides at Lift Me Up therapeutic riding in Great Falls.

FOR ERIN BUCKLES, born a conjoined twin and separated as an infant from her sister Jade, having Solomon meant that she would no longer be the girl in the wheelchair at school in Northern Virginia. She would be the girl with the dog. And, she wouldn’t have to wait for someone to pick up a dropped pencil or bring her shoes to her.

ADAM CAMPBELL says he felt connected to Kenan as soon as they met at Lakin Correctional Center in West Virginia. “[it was] the way he looked at me, while he leaned into me, while I pet him. It was a moment I will never forget.”

SARAH WISHART, a veteran, and Darby were matched last July and both are still in training as of the writing of this column. They train together and Darby continues her training separately until they are both ready for Darby to go home with Sarah.

This training time is hard on Sarah, especially leaving Darby behind when she heads home. She can’t wait for Darby to come home with her. “She's going to get me back out and helping my community again.”

At the paws4people.org annual reunion in October, Sarah struggled with her fear of crowds, related to her PTSD. Not only was she facing the crowded reunion, but that weekend marked the first anniversary of the death of one of her fellow soldiers.

He had been a true leader who was lost to an improvised explosive device in Afghanistan. To Sarah, he will always be known by his call sign, “Cowboy.” His memory and the knowledge of what he would want for her helps to propel her forward.

She was thankful to have Darby by her side.

GETTING TOGETHER with friends is challenging for Josh Gregor of West Virginia. Because of his medical needs, he is fed and/or receives medications through a tube throughout the day. He is sensitive to other kids observing the intimate details of his daily life and he always has to have a nurse or his mom nearby.

Mason, his assistance dog, has practical, life saving responsibilities like alerting adults when Josh’s tube gets twisted, but what Josh cares most about is that now he has someone to play with all of the time.

NATALIE KIDDIE AND DOLCE, a psychiatric service dog, work as co-therapists at North Spring Behavioral Healthcare in Leesburg helping youths and adolescents with mental health impairments. Often it is Dolce with whom they feel comfortable sharing their thoughts.

ALEX KEEFOVER AND KINGSLEY met when Alex was 16. This year, they started college. Like so many of the paws4people clients, Kingsley is Alex’s everything, “He's there for me. If it's picking up stuff, taking my coat off, stuff like that, and also the emotional support. If I'm having a bad day or worried about school, I just have to look at him and I'm laughing.”

Alex remembers well how he felt the day he met Kingsley for the first time, “When we got [to the prison] I was so nervous. … then when I met the dogs, pure joy.”

Alex felt the connection to Kingsley the minute they met. He says that Kingsley’s only limitation is that he cannot type for him as Alex has much to say, but has speaking and typing difficulties.

Joan Brady is a professional photographer; mentor and advocate for current and former foster children; volunteer with paws4people, Fairfax Families4Kids, and others; and a resident of Great Falls. Reach her at joan@joanbradyphotography.com.