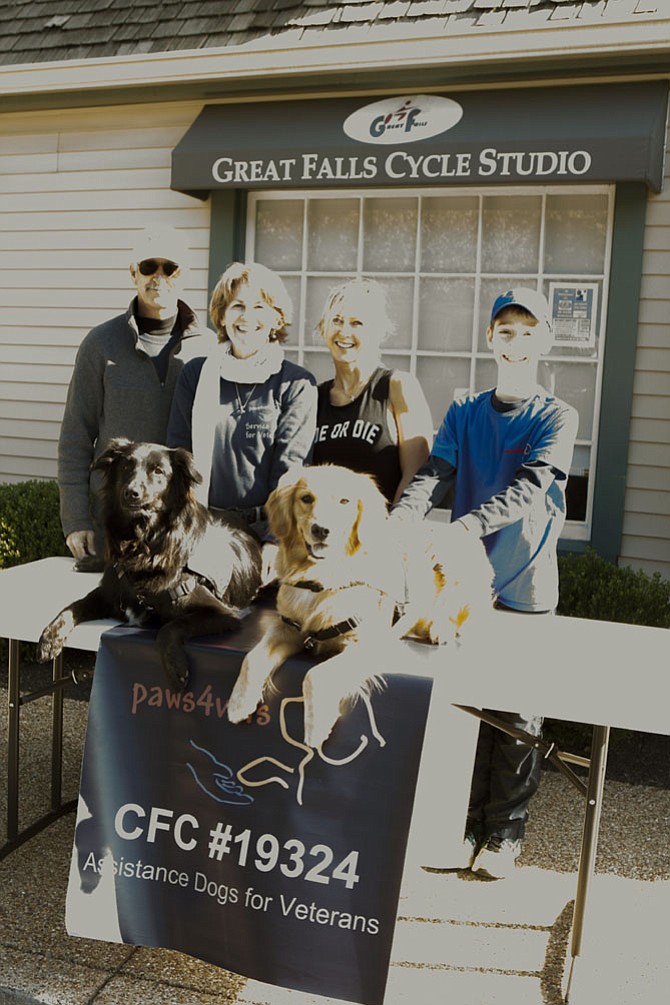 Great Falls — Jennifer Mastran and Danielle Saunders opened Great Falls Cycle Studio in 2015 with the intention of becoming a place the community could come to feel good.

While they have donated class passes to several charities in the past, they were so moved by 12-year-old Dylan Kurtz’s desire to raise money to benefit paws4people®, a non-profit that works with prison inmates to train service dogs for children, young adults and veterans, they offered to hold a special benefit class.

The weather was beautiful on Saturday, but that didn’t deter participants from enjoying the $20, 30-minute studio ride. All proceeds were donated to paws4people®. Mastran says that, “[she] loved the wonderful energy that was created; people caring about a cause and encouraging each other to come out and cycle.”

They were helping out with a training with clients and their dogs in Wilmington, N.C. when he says he fell in love with the dogs as he watched them interacting with their “person.” And it wasn’t just the dogs, he remembers, “[being among paws4people clients, staff and dogs] felt very much like a military family-- never a stranger in the room.”

who was on hand to talk about his interest in paws4people, was pleased with the turnout, “The class was full and everyone had a good time,” he says.

Miami Phillips, paws4people combined federal campaign director and his wife, Shelly, Pay-it-Forward Advocate manned a table outside the studio, to talk about paws4people and to support veteran and Fredericksburg resident, Randy Powers who greeted everyone and spoke of the impact that having a service dog has had on his life.

Powers, who was injured while on assignment in Beirut in 1983, says it took 25 years for those injuries to catch up with him. Today he has problems with his mobility and pain that at one time consumed him.

It wasn’t until he joined his wife, Donna, in her volunteer work with paws4people, that he realized how assistance dogs were changing lives. They were helping out with a training with clients and their dogs in Wilmington, N.C. when he says he fell in love with the dogs as he watched them interacting with their “person.” And it wasn’t just the dogs, he remembers, “[being among paws4people clients, staff and dogs] felt very much like a military family-- never a stranger in the room.”

As a volunteer, Powers was training Morgan, one of the assistance dogs, when he stumbled. Morgan kept him from hitting the ground, helping him to avoid embarrassment and injury. In that moment, he realized that Morgan might be able to change his life, the way he had seen other paws4people assistance dogs change the lives of others.

Today, Morgan does lots of things for Powers including picking up his cane, pulling off his socks, providing support to help him out of chairs and even picking up dirty clothes and putting them in the laundry. But most meaningful to Porter that making sure that MORGAN is happy means ensuring she gets enough exercise and that keeps Porter moving too.

Learning about the struggles faced by paws4people clients, the children and veterans, has made a significant impact on Kurtz. “Dylan has learned so much through this experience beyond he has the power to help make a difference. His two events took a lot of planning and organization. He had to determine which local businesses he wanted to partner with and then approach them. And, he had to learn how to leverage social media to promote his events,” says his mom, Susan. But 12-year-olds can’t make a difference alone. Susan and her husband, Jonathan, have been happy to guide, support and provide chauffer services as needed. Of the experience, Susan says, “While, as you can imagine, not all of it was easy, it’s been a great experience that we got to share.”

THE GREAT FALLS CYCLE STUDIO benefit ride was Dylan Kurtz’s second fundraiser for paws4people. Dylan is helping two paws4people clients with their “Pay-it-Forward” campaigns, so that others may benefit from having a service dog. Last Saturday’s effort raised $368 between the $20 class fee and some additional donations. For this non-profit, every penny counts.

You can read more about Dylan’s fundraising efforts here at:

Joan Brady is a professional photographer; co-owner of Spirited Media, Inc.; award-winning columnist; mentor and advocate for current and former foster children; a volunteer with paws4people and others; and a resident of Great Falls. Reach her at joan@joanbradyphotography.com