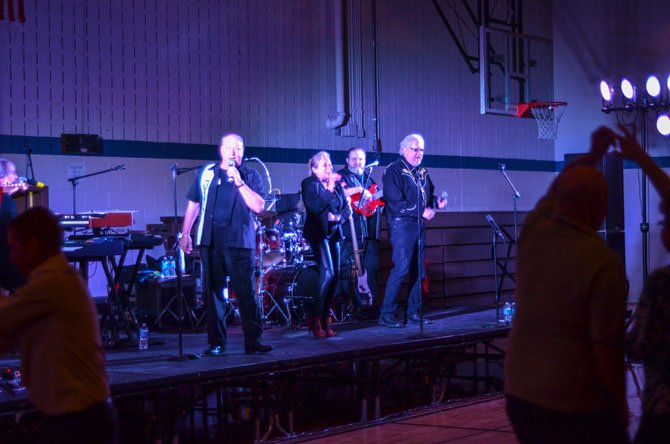 By By Ryan Dunn

The Fabulous Hubcaps band preformed Saturday evening at the Herndon Community Center’s gymnasium, playing some favorite classic rock n’ roll hits including "Surfin’ USA" and "Get Around." The Valentine's Sock Hop has been an annual event for the Herndon Rotary Club, but due to multiple factors will no longer be held as a fundraising event.

"It was always on the Saturday evening closest to Valentine’s Day," said Chris Mogensen, a resident of Herndon and event coordinator with the Herndon Rotary Club. "We have been coming to this event four to five years," said Steve Lemanski, member of the Herndon Rotary Club. "I think everyone who has attended will miss it, but the economics have gotten to the point where it doesn’t pay to continue."

The Rotary Club is the world’s largest community service organization. The chapter in Herndon has several fundraisers over the course of the year to serve the community. "We have been sponsoring this dance with the Hubcap band close to 30 years as a fundraiser," said Mogensen. "Last year for this event we sold 249 tickets, and this year my guess is 260 tickets."

Earlier that afternoon volunteers decorated the gymnasium for the event. Couples mixed and danced while the Hubcaps played favorite music and melodies of the 1950s and 1960s. "Our group cannot do it any more," said Mogenson. "If we don’t run successful fundraisers we cannot serve our community… the community center began lowering their costs to keep the event going, but it has been harder and harder to pull it off functionally. We just can’t do it as a fundraiser anymore."

The Rotary Club of Herndon Scholarship Fund also awards a scholarship to a graduating senior from Herndon High School or a resident of Herndon who attends another school or is home schooled. Applicants are considered based on good citizenship, extracurricular activities, employment or special skills outside of school, academic record, and financial need.

"It had been a great event," said Curt Rose, a resident of Reston and member of the Herndon Rotary Club. Owner of Aspen Jewelry Designs at Centreville Road in Herndon, Rose brought his children to the evening show. "It has just gotten to point where we needed to manage our fundraisers more," said Rose.

The Herndon Rotary Club meets on Wednesdays 7:30 - 8:30 a.m. at the Amphora Diner Deluxe at 1151 Elden Street in Herndon. For more information visit www.herndonrotary.org.