Max Raabe & Palast Orchester come to Center for the Arts. 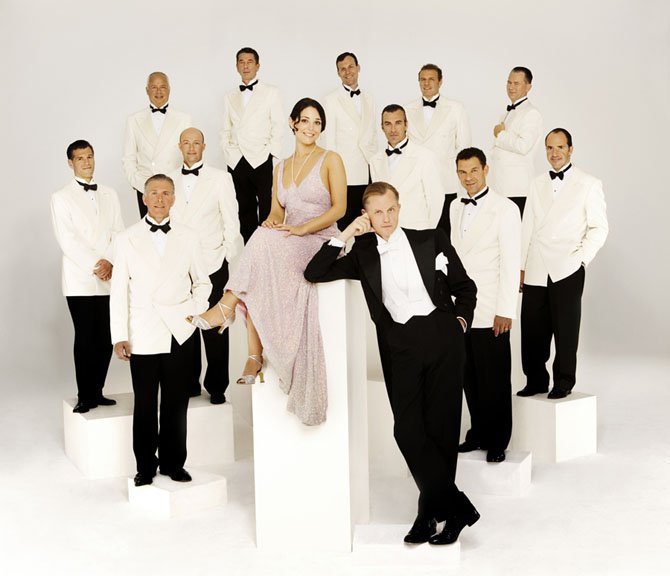 And now for something completely different for the Northern Virginia area entertainment scene. All the way from Europe to tantalize.

The debonair performer Max Raabe, a baritone crooner, will be striding on to the Center for the Arts stage; totally poised and impeccably dressed in white tie and tails with his "I Won't Dance" performance. He will be joined by a 12-piece band ready to transport listeners back to the elegant and sometimes naughty nightclub atmosphere of the 1920s and 1930s.

To show how Fairfax County is leading the way, his next stop is Carnegie Hall in New York City.

Raabe will bring along not only his voice and big band, but a wry wit and tongue-in-cheek humor as timeless standards and enchanting popular music from the 1920s and 1930s wafts through the air. The repertoire also includes classics from the Great American Songbook such as “Singin’ in the Rain,” “Cheek to Cheek” and “Dream a Little Dream” as well as novelties such as “Who’s Afraid of the Big Bad Wolf" and perhaps a song from a madcap Marx Brothers film.

Max Raabe & Palast Orchester has a growing international reputation. They have performed throughout Europe, toured in Israel and played in U.S. venues. There is a recent film titled "Max Raabe in Israel" that was shown at the 2013 New York Jewish Film Festival.

"As a child I was glued to the radio when a program came on that featured music on shellac [pre-vinyl] records. In my home town I soon started performing songs of this era...That is how the Palast Orchester started," said Raabe.

"We are 13 musicians in a typical formation of the period: rhythm, brass, reeds, piano and our pearl Cecilia Crisafulli on violin. The arrangements are all originals of the 20s/30s. We have a large collection of arrangements that were found in attics or at flea markets," Raabe added. "We will be playing some of these at the concert at the George Mason University Center for the Arts."

"We want to take the audience for two hours far away from reality, which is what this music was made for. It is unpolitical music, written to entertain," said Raabe. "Come to our show and let us make you forget your every-day worries for a couple of hours."

It is meant to be a delightful entertainment experience quite like anything you've seen before.