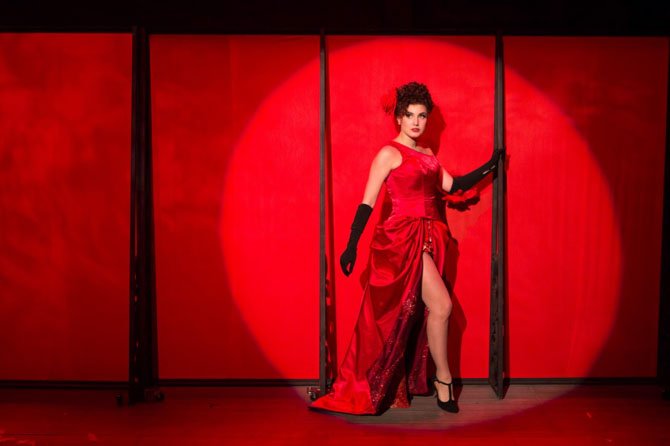 She was always more tease than strip, and ever since she first shared the stage with Tessie the Tassel Twirler in the 1920s, she was determined to be famous for more than feathers and falsies. She was Gypsy Rose Lee, the queen of burlesque, whose 1959 memoirs inspired the award-winning Broadway musical "Gypsy," now playing at Shirlington’s Signature Theatre.

Born Rose Louise Hovick, we meet her as Louise, the gawky daughter of the quintessential stage mother Rose. When her prettier and more talented sister June (later to become the actress June Havoc) abruptly runs away from the family’s vaudeville act, Louise awkwardly steps into the spotlight and out of her clothes in an effort to fulfill her mother’s show business aspirations.

But while the title may suggest that the show is about the famous stripper, it is really about Mama Rose, the unrelenting stage mother played by such legendary actresses as Ethel Merman, Rosalind Russell, Angela Lansbury, Bernadette Peters and Patti LuPone. Add to that list Sherri L. Edelen, who takes command of the stage to belt out a vibrant score by Jules Styne and Stephen Sondheim that includes "Let Me Entertain You," "Together, Wherever We Go," and the signature "Everything’s Coming Up Roses."

From her first entrance into the theatre, barking "Sing out, Louise!" as she marches up the audience aisle, Edelen completely inhabits the role of Rose, a mother who steamrolls her way onto vaudeville stages across the country. Too late to achieve her own stardom, Rose is undaunted in pursuing it vicariously through her two daughters.

Edelen, a two-time Helen Hayes award winner, portrays a dangerously obsessive Rose whose need for success is palpable from the opening strains of "Some People" to the bittersweet finale "Roses Turn." From belting to ballads, Edelen is spellbinding as she nails the challenging range of songs with a performance that outshines her Broadway peers.

Mitchell Hebert is Herbie, an endearing but lonely soul who hooks up with Rose after a chance meeting at an audition. Hebert delivers a tender performance as Herbie falls painfully in love with Rose and endures far more and stays far longer than any man should. He and Edelen have a visible chemistry that is ultimately doomed by Rose’s unquenchable need to succeed no matter the cost to those around her.

Maria Rizzo plays the title role of Gypsy, and her unexpected conversion from self-conscious wallflower to the voluptuous star is convincing and captivating. She particularly shines in the touching and melancholy ballad "Little Lamb," yet with each step across the stage, Rizzo visibly transforms from the sweet Louise into the savvy stripper who became world renown.

Joe Calarco directs the multitalented and multigenerational cast and coaxes engaging performances from Erin Cearlock as Baby June and Alexandria’s own Ellen Roberts as Young Louise. In an especially clever use of staging and strobe lights, Calarco magically transforms the tots into teens during the Karma Camp choreography to "Baby June and Her Newsboys."

Vincent Kempski stands out as Tulsa, one of the older newsboys, with an enthusiastic song-and-dance routine in "All I Need is the Girl." But its Sandy Bainum, Donna Migliaccio and Tracy Lynn Olivera as the trio of strippers who long ago should have hung up their G-strings that stop the show with an uproarious rendition of "You Gotta Get a Gimmick."

Under the talented baton of Jon Kalbfleisch, Styne’s musical score is superb and the 11-piece orchestra, punctuated by the richness of bright brass and woodwinds, electrified the audience and earned an ovation of its own.

But in the end, the success of any production of Gypsy will always be determined by the strength of its Rose, and Edelen, with an aching in her voice, perfectly nails the brash humor, the maniacal tyranny and even the faint glimmers of vulnerability as Rose’s determination turns to disappointment and despair.

"Make them beg for more and then don’t give it to them!" was the mantra of Mama Rose, and the real Gypsy never actually appeared nude on stage — her art was in being sexy, funny and clever all at once. So, curtain up! Let Signature Theatre entertain you with a spectacular production of one of theatre’s consummate and most enduring musicals.