In the wake of the chemical spill in West Virginia, weighing the threats to local drinking water. 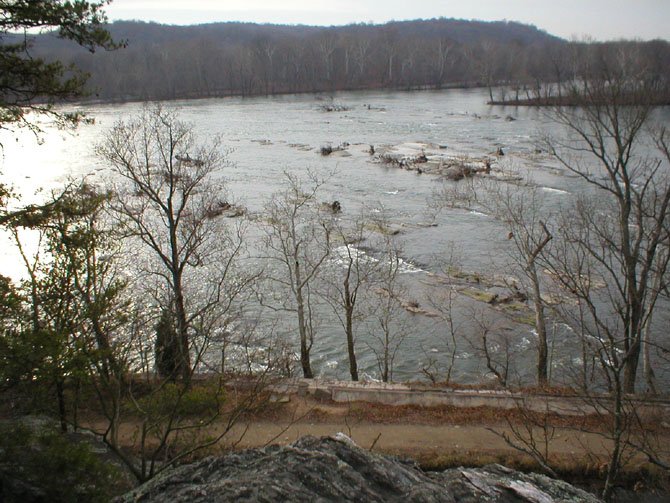 The Potomac River at Blockhouse Point, about three miles upstream from the Potomac Water Filtration plant on River Road in Potomac which provides water for millions of residents in the Washington D.C. metropolitan area. Photo by Ken Moore. 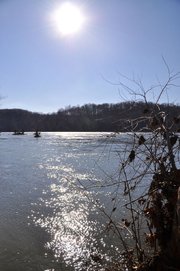 The Potomac River provides water for millions of residents in the Washington D.C. metropolitan area.

Potomac — Most of the 5 million residents in the Washington D.C. metropolitan area have no idea that their drinking water comes from the Potomac River, said Hedrick Belin, president of the Potomac Conservancy.

“Until last week, the same could have probably been said for 300,000 residents in Charleston, W. Va.,” Belin added.

On Jan. 9, West Virginia Gov. Earl Ray Tomblin informed the residents of nine counties, an estimated 300,000 people, that their tap water was contaminated. “West Virginians in the affected service areas are urged not to use tap water for drinking, cooking, washing or bathing,” Tomblin said.

A chemical leak just upriver from the water intake on the Elk River made the water suitable only for flushing toilets. For more than a week, schools and businesses were closed and residents lined up to buy bottled water or get water distributed in tanker trucks by the National Guard. Nearly two weeks later, pregnant women were still warned not to drink the water.

“Potomac Conservancy is the region’s leading clean water advocate, fighting to ensure the Potomac River boasts clean drinking water, healthy lands, and connected communities. We combine the grassroots power of 10,000 members and online activists with local land conservation and policy initiatives to strengthen the Voice of the Nation’s River.

“We seek to improve the Potomac River’s water quality by building an impassioned base of river advocates to impart change at the local level. Founded in 1993, we drive the region’s clean water movement by providing the tools that empower local landowners, activists, volunteers, partners, donors and all river champions to lead the charge for clean drinking water, healthy lands and safe access to the river.”

“Established in 1918, today WSSC is among the largest water and wastewater utilities in the nation, with a network of nearly 5,600 miles of fresh water pipeline and more than 5,400 miles of sewer pipeline. Our service area spans nearly 1,000 square miles in Prince George’s and Montgomery counties serving 1.8 million residents through approximately 460,000 customer accounts. WSSC drinking water has always met or exceeded federal standards.

“Our Mission: We are entrusted by our community to provide safe and reliable water, life’s most precious resource, and return clean water to our environment, all in an ethical, sustainable, and financially responsible manner.”

The ICPRB's mission is to enhance, protect and conserve the water and associated land resources of the Potomac River and its tributaries through regional and interstate cooperation. Through regional cooperation and partnerships, ICPRB is protecting the river and improving the quality of life in the watershed, as it has since 1940.

THE POTOMAC RIVER Water Filtration Plant on River Road in Potomac, operated by Washington Suburban Sanitary Commission, extracts 100 million gallons of water a day from the Potomac River and delivers it to millions of people in the region.

Most of those people take for granted that when they turn on the tap the water that comes out is safe and pure.

“Absolutely. Out of sight, out of mind. That’s how we describe it,” said Jim Neustadt, director of communications and community relations with WSSC.

Could an incident like what happened in West Virginia jeopardize the water supply for millions of people?

“The answer is anything can happen anywhere, but we take many precautions,” said Neustadt. “You have to understand that this is a regional issue, you have Fairfax Water, you have Loudoun water, you have DC water. It is an issue that gets worked on regionally.”

That regional effort includes constant monitoring of the river.

“We can reassure the public that this is not something we haven’t thought about,” Neustadt said. “We take this very seriously.”

People should not take their drinking water for granted, said Curtis Dalpra, with the Interstate Commission on the Potomac River Basin.

“Maybe the utilities make it too easy for us with how they do their work successfully and quietly,” said Dalpra. Perhaps an incident like this will help in getting people to understand how important the river is in their daily lives, he said.

“If there’s any silver lining to the incident in West Virginia, it’s that it keeps people focused on their drinking water,” Dalpra said. “People are accustomed to turning on their tap and expecting a clean safe product coming out, and they don’t think about it very much.”

THE ELK RIVER in West Virginia flows through a far more industrial area than the Potomac River does here.

But chemical spills are far from the only threat to the region’s drinking water.

“The greatest threat to the region’s water quality is polluted runoff,” said Belin. “This growing source of pollution is water that washes off the land after a rain storm, carrying sediment, excess nutrients and other toxins and contaminants directly into streams and rivers.”

Local activists have been pressing for action on water quality for decades, calling for restoration and preservation of the environment in the stream valleys.

Watts Branch is a stream which flows into the Potomac River just above the water filtration plant intake, bringing with it sediment and runoff. West Montgomery County Citizens Association would like to see investment in improving the water quality upstream in the Watts Branch as a way of improving water quality at the intake.

Maintaining a buffer of forest along streams and the river banks provides significant protection and improvement to water quality.

MANY OF THE CONTAMINANTS that make their way into the river cannot be fully removed through the treatment process, including some antibiotics, chemicals in personal care products and many other drugs that go down the toilet, said Dalpra.

“A lot is not fully removed by waster water treatment, there are trace water elements,” Dalpra said. “These are substances that are present in parts per million and parts per billion.”

But it’s not safe to say our water sources are impervious to harms, he said.

Overall, the public has embraced the need for conservation, with water consumption and consequently revenue both declining for WSSC, said Neustadt.

But a bigger challenge is connecting citizens to the river so that they understand its importance, and consequently the importance of the environment, trees, forests and stream valleys.

“Polluted runoff can severely degrade water quality, wildlife habitat and fish populations in the Potomac’s tributaries and the main stem,” said Belin. “Too often we think about protecting the environment as something that only benefits trees, wildlife and fish. Keeping our lands and waters safe is most importantly about our right to safe drinking water, clean air and the legacy that we leave for our children and grandchildren.”

The future of water is so very important, agreed Neustadt.

“What do we have to do to keep our waters clean and healthy? There’s only so much water in this world. This is the same water the dinosaurs used,” said Neustadt.