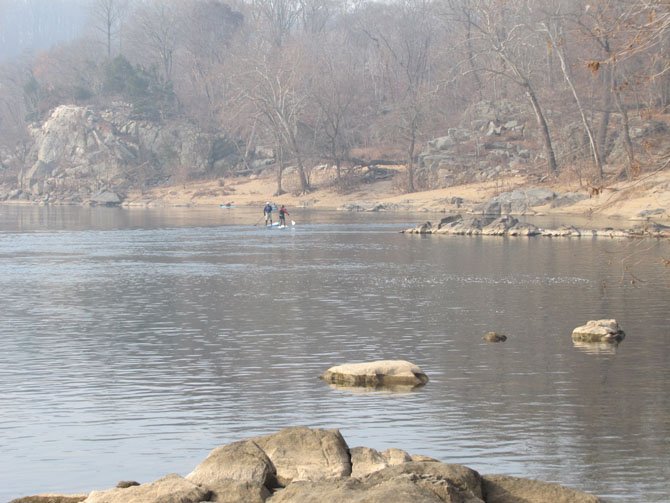 A river’s health is graded in part by its water quality, recreation, fish and aquatic life. Photo by Ken Moore.

Bikers, joggers, walkers, huskies and beagles, traveled Sunday from Anglers to widewater and Great Falls without interruption after repairs were completed to a 125-foot breach of the towpath damaged by 2008 Tropical Storm Hannah.

Potomac — The Potomac Conservancy released its sixth annual State of the Nation’s River on Nov. 15, handing the Potomac River’s health a “D” or “barely passing grade.”

The report identifies consequences of the pollutants of the 405-mile-long waterway, and offers solutions for stronger protection of the river.

Why Does This Matter?

More acres of parks, more trees, more open space, protected stream valleys and stream valley parks are all a part of what gives Potomac its character. But these aren’t here because this is where the money is. These amenities that residents enjoy are designed to protect the water quality in the Potomac River.

The Potomac Conservancy is a nonprofit whose mission is to safeguard the Potomac River and surrounding watershed. The Potomac River supplies drinking water to more than 5 million people and is “exquisitely sensitive” to events over a 14,700 square mile watershed.

Breach of the Towpath Repaired

The park service and C&O Canal Trust held a celebration of the completed at Anglers on Saturday, Nov. 17. The repairs — completed 31 days ahead of schedule — were finished in late October.

The breach occurred at Anglers on Sept. 5-6, 2008 when a sinkhole grew to a full-scale breach during Tropical Storm Hannah’s downpours and runoff from the surrounding hillside.

“The park implemented a long-term sustainable solution to limit problems in an area where leaks have been a long-standing issue,” according to the Canal Trust.

Funding received in September 2011 to repair the breach at Anglers was the product of a three-year collaboration of park staff, elected officials, the C&O Canal Trust and the community. The project became eligible for funding because of a $100,000 donation given by the Trust, the park’s official non-profit partner, on behalf of the community.

Maryland’s Transportation Enhancement Program accounted for $1.1 million of the total $3.3 million required for the repairs, and the additional $2.2 million necessary came from the National Park Service construction program.

“The restoration of the historical towpath and the rewatering of the canal, and thus the return of scenic views and recreational opportunities at Anglers, showcases the significant impact a community of supporters can have on the preservation and conservation of this national treasure in our backyard,” said officials of the park service.

While past pollution came primarily from factories and industrial sites, “today’s pollutants have various sources, usually entering our waterways in the form of runoff from land,” according to the Potomac Conservancy report.

“From farmers fertilizing crops to homeowners greening up their yards, people are pouring too many nutrients onto the landscape,” according to the report. 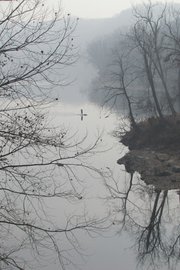 Sunday was a beautiful day on the Potomac River, with kayakers and stand-up paddle boarders dressed for the chilly water temperature.

And the region will add 2 million people for the next 20 years — with more buildings, road and homes — according to the “2012 Potomac Agenda,” a companion document to the report.

“We must take steps to ensure high water quality by preventing polluted runoff before development, by decreasing land disturbance, preserving vegetation and minimizing impervious cover,” said Hedrick Belin, president of the Potomac Conservancy. “No one has a right to pollute someone else’s water.”

THE CONSERVANCY urges increasing funding for clean water programs, providing incentives and technical assistance to individual homeowners and strengthening regulations at the state and local level.

Watersheds in Montgomery County, for example, suffer from impairments caused by harmful nutrients, poor habitats and PCBs in fish.

Poorly planned construction can cause sediments that bury fish spawning grounds, block sunlight and suffocate healthy organisms. The removal of streamside vegetation and forested tracks that soak up such sediments along the river and its streams make existing problems worse.

Recent studies show that widespread use of antibiotics in people and farm animals are making some bacteria resistant to treatment, causing “unintentional super bugs.”

And a growing number of “exotic” chemicals from drugs, cosmetics and the industrial process have only recently begun to be tracked and researched, according to the report, including dozens of pesticides and herbicides, pharmaceuticals, and residues from shampoos and perfumes. Low levels of these chemicals can disrupt the endocrine system and appear to be contributing to the development of intersex fish in the Potomac River, including male fish carrying eggs.

The federal Clean Water Act celebrates its 40th anniversary this year and mandates action to create and maintain water quality needed to support the highest designated use. “The Clean Water Act has catalyzed dramatic water quality improvements across the nation,” according to the report, but major challenges remain.

Incentives and technical assistance to individual property owners would show homeowners and businesses how they can reduce impervious surfaces — such as the RainScapes program in Montgomery County. Educating farmers on how to best apply fertilizer to protect water quality and enhance their crops could reduce unwanted nutrients in the river.