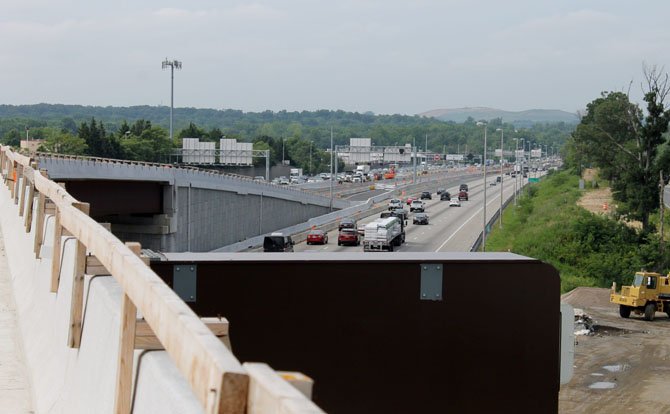 A view of the 95 Express Lanes construction. The lanes will be completed by the end of 2014. Photo by Janelle Germanos.

Drivers planning on using Interstate 95 to get to their vacation destination, or even just to get to work, should prepare for overnight and weekend HOV lane closures from Washington, D.C. to Dumfries as construction of the 95 Express Lanes continues.

That’s according to Susan Shaw, Megaprojects director for VDOT, who announced July 10 that construction of the 95 Express Lanes is more than 80 percent complete.

“We try to make every effort to minimize impact and keep traffic moving,” Shaw said. “We do understand that this is a very heavily used corridor. We’re trying to use the times when traffic volumes are the lowest.”

Construction will be completed by late 2014 and will be opened to traffic by early 2015.

“While the final phase of construction may be less visible to drivers than in the past, the 95 Express Lanes Corridor remains an active work zone, in which the safety of drivers and workers are our top priority,” Shaw said. “Now more than ever, it is important for the traveling public to use caution when traveling through our work zone. When you see the orange cones and barriers, slow down for your own safety and remember that there are people working on the other side.”

The 29-mile system of express lanes will require all drivers to purchase an E-ZPass or E-ZPass Flex in order to use the lanes. This includes those who are driving alone, in a carpool, a slug, or in a vehicle with a clean fuel plate. The E-ZPass Flex will allow those who are traveling with three or more people to experience a toll-free trip.

Construction in the final phase of the project, which runs from Stafford County near Garrisonville Road up to 395 near Edsall Road, is focused on installing tolling and traffic management devices.

“We have over 950 tolling and traffic management devices that we need to test, and we need to test them in the field and also back at the Express Lanes operation center,” said Walter Lewis, the project director for Fluor-Lane 95.

Up to 1,500 workers will be on the construction site working to finish the lanes between now and the end of the project.

“To keep our workers and fellow I-95 drivers safe, we ask drivers to support orange cones no phones by putting down their cell phones while traveling through the 95 Express Lanes work zone. No phones, no text and no distractions,” said Kevin Ginnerty, director of project delivery for Transurban.

The almost $1 billion public-private partnership, which according to VDOT will make travel in the area faster once opened, began in August 2012. Six new bridges, four flyovers, three widened bridges, and 15 bridge and ramp repairs are included in the project.

“We know that this work is going to cause some unavoidable delays with the lane closures, and it can be frustrating for drivers. But we are making sure that the closures that we have are necessary to keep the traveling public and the work crews safe,” Shaw said.