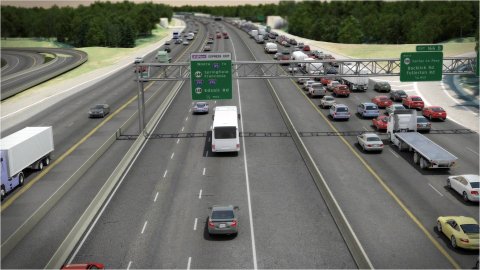 Existing HOV lanes will be expanded from two to three lanes from Edsall Road in Springfield on I-395 to Prince William Parkway. Photo Courtesy of 95 Express Lanes.

When the 95 Express Lanes open in 2015, all drivers, whether they are driving alone, in a carpool, a slug, or in a vehicle with a clean fuel plate, will be required to purchase an E-ZPass or E-ZPass Flex to use these lanes.

Unlike the 495 Express Lanes project, which was more like building a highway within a highway, McGurk said, HOV lanes on 95 are being converted into express lanes.

“With that conversion comes a whole bunch of different rules,” McGurk said.

“We want those who use the HOV lanes to continue to vanpool, carpool, slug on the express lanes, but they’ve got to do their homework,” McGurk said. 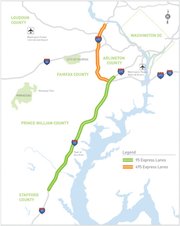 THE EXPRESS LANES will run from Stafford County near Garrisonville Road up to 395 near Edsall Road, nearly 29 miles. Anyone using the express lanes will need to purchase an E-ZPass or E-ZPass Flex, which are available at retailers throughout the area, including Giant and Wegmans.

“The E-ZPass Flex is the special E-ZPass that was created for use on the 495 Express Lanes, and then the 95 Express Lanes as well, that gives people the option to take a toll-free trip if you have three or more people in your car,” McGurk said. “That E-ZPass actually has the switch at the bottom, and the driver puts it in either toll-paying mode if they’re by themselves or with one other person in the car, or if they have three or more people they put it in HOV mode.”

The E-ZPass Flex is critical, McGurk said, because it will allow those who are traveling HOV-3 in the HOV lanes today to enjoy the same toll-free trip.

Regardless of whether drivers participate in a slug, carpool or vanpool, any vehicle with three or more people needs an E-ZPass Flex to use the express lanes.

“You can take advantage of that same network that you travel today with the HOV lanes,” McGurk said.

The only passengers receiving a toll-free trip on the express lanes will be those with a total of three or more people in their car, transit riders, or motorcycle riders.

“Today on the HOV lanes, if you have a special clean fuel license plate that was issued before July 2006, you can use the HOV lanes without meeting the HOV-3 occupancy requirement,” McGurk said. “That will change as well on the 95 Express Lanes. The only way to get that toll free ride is with three or more or riding a bus or motorcycle.”

Under the current HOV system, drivers with less than three people are not able to use the lanes during restricted peak times. However, under the new express lanes system, those drivers can pay a toll to access the lanes at any time, McGurk said.

“So during peak morning rush hour, 7:30 and 8 in the morning, normally they aren’t allowed in the HOV lane network, but they’re going to have the opportunity to be able to pay a toll to get in the express lanes network,” McGurk said.

Once the 95 Express Lanes end at Edsall Road in Springfield, those with three or more people in their vehicles can continue north onto the I-395 HOV lanes. However, during times when the I-395 HOV rules are in effect, those who do not meet the HOV requirement will have to exit the express lanes and travel on the main parts of I-395 when the express lanes end at Edsall Road.

IN APRIL, Governor Terry McAuliffe announced that the 95 Express Lanes project is more than 70 percent complete and will open in early 2015.

“The progress on the 95 Express Lanes project is a visible reminder of the congestion relief and new travel choices that Virginians will have available to them in less than a year,” McAuliffe stated in an April 29 press release. “The project has also benefited jobs and business opportunities, particularly for women- and minority-owned businesses as well as small businesses. Steel work was completed by a local disadvantaged business enterprise (DBE), Interlock Steelworkers, Inc., exemplifying the Commonwealth’s commitment to providing business opportunities that support jobs and generate economic growth.”