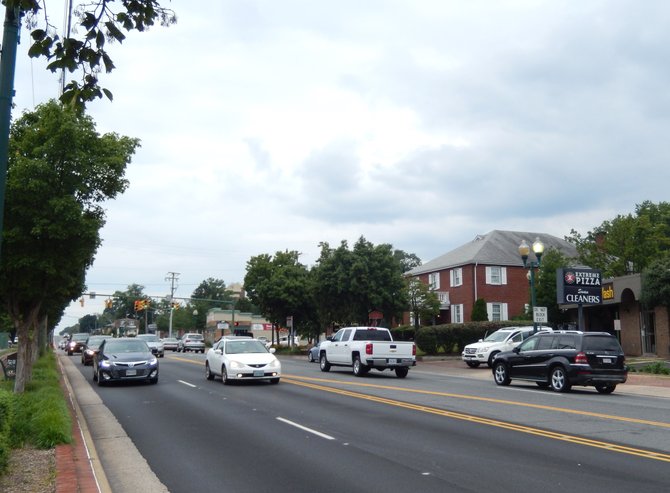 It’s been a long time coming, but the Maple Avenue Corridor (MAC) zoning district is close to becoming a reality in the Town of Vienna.

On July 7, the Town Council held part one of a two-part public hearing on the proposed, new district for commercial property along Maple Avenue. Part two is set for Aug. 18.

It’s been evaluated since 2001, and – so everyone’s views would be represented – the late Mayor Jane Seeman and the Town Council appointed a broad variety of people to a 17-member steering committee involved in this project.

Now, the committee has passed its final report, 4-3, and those opposed to it wrote their own report, as well.

“You have changing demographics, new businesses and mainly by-right development,” said Lardner. “So this would give you more control over development and protect the small-town character while staying true to what Vienna’s all about.”

What the MAC should do, she explained, is control and direct density, support local businesses and encourage economic development. “And it’s voluntary – businesses don’t have to join it. But they can ask to be rezoned in and the decision would be up to the Town Council. If they do become part of it, it’s hoped that they’ll use the MAC guidelines to create more walkable, mixed-use developments. 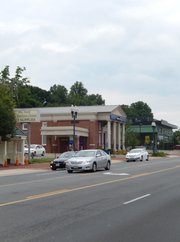 Some of the businesses along Maple Avenue in Vienna.

“People told us this part of Vienna wasn’t affordable anymore for their children and grandchildren,” said Lardner. “They also said there aren’t condos and apartments for them to move to here when they want to leave their homes and large lawns behind, but still remain in the Maple Avenue area. They want it made safer and more pedestrian-friendly so they can walk places and hang out.”

“Maple Avenue currently carries 33,000 vehicles per day through the Corridor,” said Noble. “With improved pedestrian connections, people could park once and go from business to business, instead of driving from parking lot to parking lot.”

He said there’s no plan to widen Maple, and he encouraged the Council to look at Vienna as a “mixed-use community, because it generates less vehicle traffic. Under by-right zoning, we have little ability to address traffic. But the new zoning allows us to require traffic studies, proffers and multimodal traffic, as well as less driveway access to businesses from Maple Avenue. It also means less delay of other vehicles and less crash risk.”

Flis said the Vienna Business Assn. asked what accommodations have been made to protect and retain the small, local businesses. “But the zoning code isn’t the tool to do this,” he said. “Things like tax incentives are.”

“There are buildings reaching the end of their life cycle and needing investment,” continued Flis. “The focus is on place and experience, not just on the retail, itself. Demand for office space has declined and retail is going to have a smaller footprint.”

UNDER THE MAC PROPOSAL, open space is promoted and businesses wishing to add outdoor tables or displays won’t have to go through a public hearing. A development doesn’t have to be a minimum size, so smaller businesses may be encouraged. Under the existing zoning, said Flis, “Current businesses have little opportunity to develop.”

“MAC reduces the amount of impervious area and allows businesses to go from three to four stories, but no higher than 54 feet,” said Lardner. “There’s a more robust approach to landscaping, so there’d be one tree per eight parking spaces, plus 10 percent open space. And there’d be bike parking for residential buildings of 10 or more units.”

She said current landowners in the MAC could stay as is, but the new zoning district “provides businesses a chance to grow and adds incentives for them to do so. And the MAC gives them a tool to address redevelopment challenges.”

Overall, added Noble, “The purpose of the MAC is to allow the town to control the inevitable changes on the way, protect the residential community and enhance the business environment.”