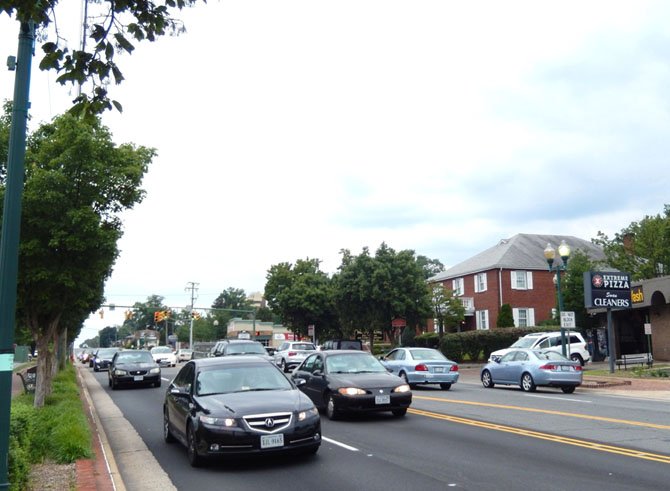 The Maple Avenue Corridor (MAC) zoning district has been years in the making. Many residents and business owners wanted what’s essentially Vienna’s main street to be revitalized and made more bicycle-and pedestrian-friendly.

So a 17-person steering committee worked on the MAC two years to create a blueprint that would enhance business development while preserving Vienna’s small-town feel and the character of the nearby residential neighborhoods.

The old zoning ordinance dated back to the 1960s. But time has moved on; and now, besides vibrant businesses, the Town wants Maple Avenue to also include public art, energy efficiency, gathering spaces and mixed uses.

UNDER THE MAC, the existing, 5-foot-wide sidewalks will be changed to a 20-foot setback to allow for wider sidewalks, street trees and space for outdoor dining. Trees will be required in parking lots, too. And new architectural standards will make sure that buildings adjacent to residential property aren’t higher than 35 feet.

However, any redevelopment under the MAC will be voluntary and will happen over time — and some Maple Avenue properties won’t ever be redeveloped. But if they are, said Vienna Deputy Director of Planning and Zoning Matt Flis, the MAC will benefit small businesses and it’s expected that developers will pay for any infrastructure improvements.

In addition, he said, “Projects submitted through the MAC would go through a rigorous review process with public input.” And Vienna can “require developers to perform traffic studies, themselves, rather than the Town paying for them.”

At the Town Council’s Monday, Sept. 22 meeting, Flis said the ordinance sections involving bicycle parking, public art and signage had been clarified, in response to the Council’s and public’s comments. Vice-Mayor Edythe Kelleher then made a motion to approve the revised ordinance.

“I think the committee did a good job of [helping determine] what Vienna will look like in the future,” said Councilman Howard Springsteen.

Councilwoman Carey Sienicki thanked the Planning and Zoning Department, all the other Town departments and the residents “who’ve worked on this for decades. It’s really been a collaborative effort; I applaud their time and effort and I think it’s a really good document.”

Kelleher also thanked the Planning Commission and consultants who participated. She said the MAC would provide incentives for redevelopment and acknowledged the work of previous panels who’d wrestled with this matter and made their own recommendations.

“Vienna’s current strip zoning won’t encourage people to start a business here,” said Kelleher. “We can’t prevent change; but the purpose of the MAC is to direct it in ways that benefit Vienna.”

Councilman Pasha Majdi, however, wasn’t in favor of the document because he believed an economic-impact study should have been done as part of the process. But all the other Council members supported the new ordinance wholeheartedly.

“I’m so excited, not only for us, but for our children, grandchildren and generations to come,” said Councilwoman Linda Colbert. “I think it’s time to make some changes.”

Councilman Emil Attanasi thanked the Town staff for “introducing safeguards to protect our residential neighborhoods. We have about 106 acres in the Maple Avenue Corridor and about 70 acres won’t be redeveloped for a long time. I hope this guides it wisely.”

“Maple Avenue should be a destination, not a thoroughfare between Oakton and Tysons Corner.”

MAYOR Laurie DiRocco said this ordinance has been a long time coming. “The goal was to reinforce Maple Avenue as Vienna’s main street and get away from the strip zoning we have today,” she said. “Constructive feedback was helpful in making the MAC better.”

“It’s important to preserve the past but, ultimately, we have to move forward,” she continued. “Maple Avenue should be a destination, not a thoroughfare between Oakton and Tysons Corner.” The Council then voted and passed the ordinance with only Majdi voting no.