Lights Go Up Along W&OD Trial 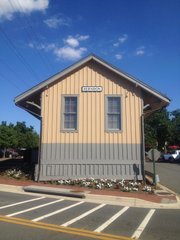 In July work was done on the historic Herndon depot building to replace weather damaged board. The depot building was added to the National Register of Historic Places in 1979.

In downtown Herndon construction has been occurring at several locations including the Vinehaven townhouse project on Vine Street. On Spring Street utility improvements are expected to continue through mid August to replace the existing waterline, install a new sewer line, and install utility conduits and duct banks along Spring Street, between Elden Street and Locust Street. The historic Herndon depot building had work done to replace weather damaged board and batten siding and repaint the repairs. The contract for this work was completed by Western Loudoun Restoration. “We almost exclusively do preservation work,” said Western Loudoun Restoration president and carpenter Robert Sanders.

ANOTHER PROJECT started in July was placement of light posts along the W&OD Trail which runs through downtown Herndon. “The W&OD trail goes right through the heart of our downtown and is well utilized by both residents and visitors,” said Herndon Vice Mayor Jennifer Baker. “Lighting the trail will encourage extended daily use and make it safer for all who use it."

The Northern Virginia Regional Park Authority enabled this project by entering into an operating agreement with the Town of Herndon, and is the first trail lighting project along the W&OD. The Herndon Parks and Recreation Department had the lead on the project, and submitted a grant application to the Department of Conservation and Recreation, which provided $200,000 in matching funds to this first phase. The Herndon Department of Public Works oversaw the design and construction of the project. “We too are excited for the lights to go on, and expect there will be a ribbon cutting in August,” said Cindy Roeder, director of the Herndon Parks and Recreation Department. 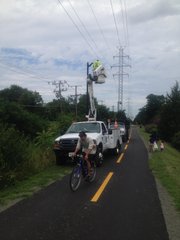 R.E. Lee Electric Co., Inc. was contracted to install lights along the W&OD trail in the Town of Herndon. There are 39 light poles being installed with this phase of the project. A potential future phase of lighting is from Ferndale Avenue to Crestview Drive.

A total of 39 lights have been installed, but they have not yet been energized. Dominion Power will be supplying the electricity. “This first phase has three sections to it, from Ferndale to Center Street, from Center Street to Station Street, and from Elden Street to Van Bureun,” said Randy Schell, a chief of Programs & Project Management at Town of Herndon. The W&OD Trail is classified as a regional park, maintained by the Northern Virginia Regional Park Authority. It includes 45 miles of trail from the Shirlington section of Arlington County to Purcellville, in western Loudoun County.

“There are some parts of the W&OD trail which I cannot commute in the dark even with a bike light,” said Arlington resident Karen Palino, a patron of the Green Lizard Cycling in Herndon. “I think the lights will be helpful.” A second, future phase of the electric lights will run from Ferndale Avenue to Crestview Drive. This phase has not yet received approval by the northern Virginia Regional Park Authority and Dominion Power.

DESIGN OF THE LIGHTS into consideration the concerns of nearby neighbors, and the lights are designed to throw light down and onto the trail, not ambient lighting that could intrude into peoples homes and backyards. The Town of Herndon will be monitoring the lights and adjust as needed.

“We are delighted to see the lights go up on the trail, this was a project approved by the prior council in cooperation with the NVRPA,” said Town of Herndon Council member Grace H. Wolf. “These lights will provide additional lighting in the early evenings and dusk hours for primarily special events such as the Herndon Festival or Friday Night Live. The lights will increase safety and allow folks to get home after our signature events and not have to walk or bike in the dark! I’m excited to see them go up.”