Herndon is first municipality to light a section of the W&OD trail. 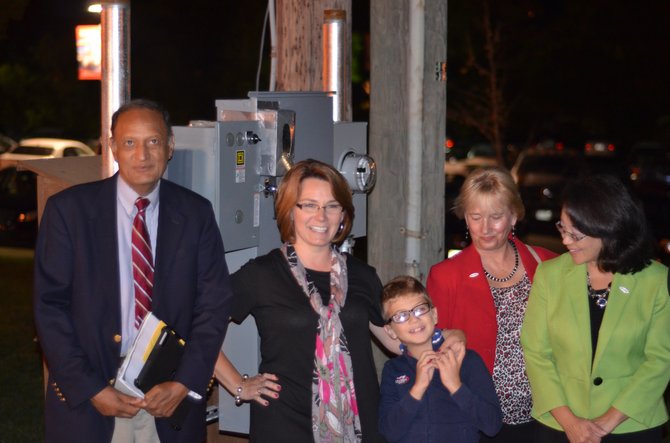 Town of Herndon Mayor Lisa Merkel and the Herndon town council celebrated the completion of installation of lights along the W&OD trail with a ceremony on Tuesday, Sept. 9. The ceremony was held on the W&OD Trail near the intersection with Lynn Street in downtown Herndon, near the caboose. This is the first lighting project on the 45-mile trail, which was formerly off-limits after dark.

“The lights will bring more usage and safety,” said Dirck Harris, head of the W&OD Trail Patrol. Volunteers with the Trail Patrol promote safe use of the trail and operate with the Friends of the Washington and Old Dominion Trail (FOWOD), a citizen-driven organization dedicated to improving the W&OD Trail. It was re-established as an advisory body of the Northern Virginia Regional Park Authority in 1997.

The Northern Virginia Regional Park Authority (NOVA Parks) enabled this project by entering into an operating agreement with the Town of Herndon, and is the first trail lighting project along the W&OD. The Herndon Parks and Recreation Department had the lead on the project, and submitted a grant application to the Department of Conservation and Recreation, which provided $200,000 in matching funds to this first phase. The Herndon Department of Public Works oversaw the design and construction of the project. The lights extend from Van Buren Street to Ferndale Avenue. A second, future phase of the electric lights will run from Ferndale Avenue to Crestview Drive.

IN MARCH 2013, NOVA Parks extended the trail hours to 5 a.m. to 9 p.m. on the section between Herndon and Shirlington to make the trail more accessible for bike commuters. NOVA Parks manages the trail, which is a public park. “We are excited that the regional park authority has opened up the trail until 9 p.m.,” said Bruce Wright, chairman of the Fairfax Advocates for Better Bicycling (FABB). “Having the trail lit will make the trail safer for everyone.”

Image by Friends of the Washington and Old Dominion Trail.

The W&OD Trail is owned and operated by the Northern Virginia Regional Park Authority and run from Shirlington near I-395 to Purcellville in Loudoun County. The trail has 45 miles of paved trail for walking, running, bicycling and skating.

The W&OD is one of Virginia’s longest parks, 45 miles of paved trail for walking, running, bicycling and skating and 32 miles of adjacent gravel trail for horseback riding. Over two miles of the trail are encompassed in the Town of Herndon.

“It is not overwhelming lighting, it is aesthetically pleasing,” said Karl Mohle, Manager of the W&OD Railroad Regional Park. Mohle attended the lighting ceremony along with Cindy Roeder, Director at Herndon Parks and Recreation Department. “With people working different hours, it will help make the trail safer for people who travel in the evening,” said Mohle. Representatives from the Herndon Police Department including Corporal Chris Farbry and Senior Police Officer Denise Randles were also present.

The Town of Herndon will be responsible for maintaining the lighting. The town chose not to use LED lights but instead metal-halide lamps which are less expensive. These light bulbs are designed to have an estimated service life of 7,500 hours. Design of the lights took into consideration the concerns of nearby neighbors, and the lights are designed to throw light down and onto the trail. The Town of Herndon will be monitoring the lights and adjust as needed. 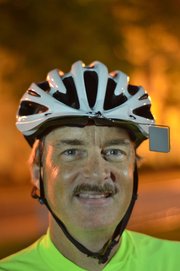 Herndon resident and bicyclist Jeff Allen attended the September Herndon lighting ceremony held by the W&OD trail. Over two miles of the trail are encompassed in the Town of Herndon.

On Oct. 28, the Fairfax County Board of Supervisors will hold a public hearing on a countywide Bicycle Master Plan. The plan will determine what steps should be taken to improve the existing transportation system and make Fairfax County bicycle friendly. The plan will recommend how bicycle friendly design can be incorporated into future roadway projects, transit projects, and provide policy guidance to the public and private sectors on promoting bicycling as transportation.

PREVIOUSLY there has been discussion of setting up lighting along the W&OD trail in parts of Vienna. The lights at the Town of Herndon will serve as a testing ground and pilot for other possible W&OD lighting projects. “I think the whole trail should be lit,” said Timothy Kelleher, Vice President of Johnson Mirmiran & Thompson (JMT). JMT designed the lighting system along the trail.

“Of course the lights look wonderful, but it is really about safety,” said Herndon resident Jeff Allen. “It is not just about the citizens of Herndon but for thousands of people in the entire region, it sets an example for lots of neighboring communities.”