Project would light 3,800 feet of trail within town borders. 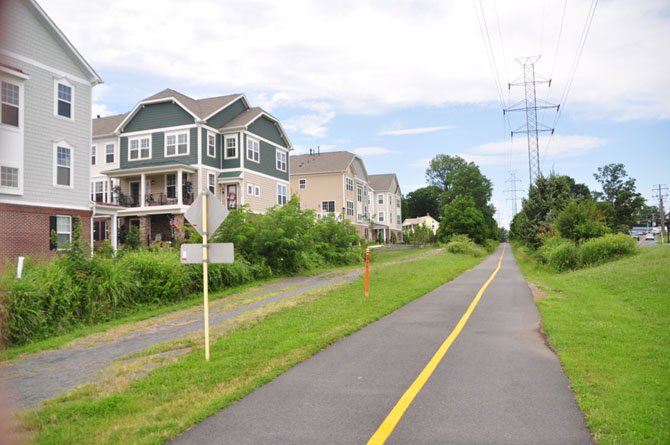 This section of the W&OD Trail, just west of Van Buren Street, is the subject of a proposal that would light 3,800 feet of trail between Van Buren Street and Ferndale Avenue. Photo by Alex McVeigh.

Herndon — The Town of Herndon’s Department of Parks and Recreation will begin to seek public comment on a proposal to light a 3,800- foot section of the W&OD Trail. The proposal, which would include submission of a Recreation and Trails Grant to the state’s Department of Conservation and Recreation, calls for approximately 50 light posts, along with necessary electrical equipment and underground wiring.

The portion of the trail that would be lit starts at Van Buren Street and runs northwest to Ferndale Avenue. It runs through the heart of downtown Herndon, past the town green, Fortnightly Library, Herndon Community Center and Bready Park.

“I’m all for anything that encourages use of the trail, but it seems like there are many other sections that would benefit a lot more from lighting,” said Ben Jameson, a regular bike rider on the trail. “Downtown Herndon is fairly well lit and open, and so is the area near Bready Park. If it’s a safety concern, there are other sections, particularly just east of Van Buren, that are a lot more secluded and remote.”

The intersection of the W&OD Trail and Ferndale Avenue will be the western border of a project that would place lights on the trail.

The W&OD Trail is classified as a regional park, maintained by the Northern Virginia Regional Park Authority. It includes 45 miles of trail from the Shirlington section of Arlington County to Purcellville, in western Loudoun County.

The park is open from dawn to dusk. The proposal would include timers to restrict use after closing.

“If the trail is supposed to be closed after dusk, I’m not sure what good it would do to light the trail, which would seem to encourage uses after dark,” said Sherri Benvolio. “If the section being lit is going to be less than a mile, I’m worried that it will encourage people to come out after dark, and that if they’re on a jog or bike ride, they’ll feel it’s OK to go past the lighted area, which is away from roads and makes people more vulnerable.”

A second phase of the project would include an additional 2,200 feet of lighting, consisting of approximately 30 fixtures, continuing northwest from Ferndale Avenue to Crestview Drive. That stretch passes mostly along the Herndon Centennial Golf Course, and passes over Herndon Parkway.

According to the town’s Parks and Recreation staff, the project has been identified by the town’s Capital Improvement Program for Fiscal Years 2013 through 2017.

The public comment period will be open from Friday, Aug. 23 through Tuesday, Sept. 25. Comments must be received in writing, and must include the sender’s name, mailing address and telephone number. Comments can be submitted by e-mail to parksandrec@herndonva.gov, with “W&OD Trail Lighting Project” in the subject line, by mail at Town of Herndon Parks and Recreation Department, c/o W&OD Trail Lighting Project, P.O. Box 427, Herndon, Va. 20172, or by fax at 703-318-8652.