Board votes against plan to extend life of Lorton Landfill. 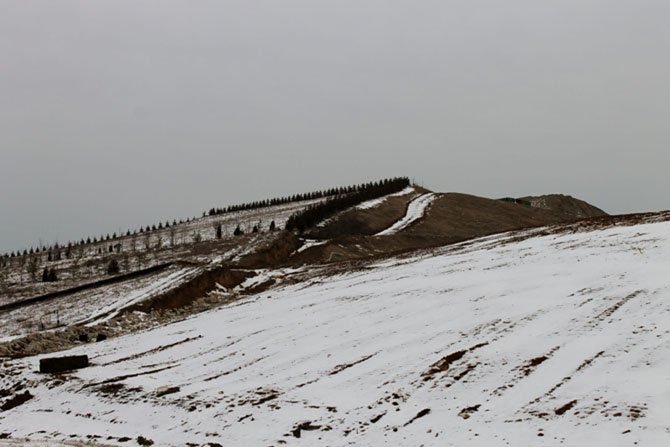 An application to extend the life of the Lorton landfill has been denied by the Fairfax County Board of Supervisors. Photo by Janelle Germanos.

The Board of Supervisors voted late Tuesday to reject an EnviroSolutions application to extend the life of the Lorton construction debris landfill until 2034.

Supervisors voted in a 6-4 vote to deny the application, which in effect will require the landfill to close by the end of 2018.

The landfill, located near Interstate 95 in Lorton, is owned by Manassas-based EnviroSolutions. The company applied in fall 2013 to extend operations of the landfill until 2040.

Following attempted community compromise, including public hearings that went late into the night, the application was denied on Tuesday.

Citizen groups such as the South County Federation, a group of homeowner and civic associations in the Lorton area, opposed the application.

“The Fairfax Chamber is disappointed with the decision by the Board of Supervisors to deny ESI’s amended compromise proposal. By striking down this proposal, we fear that developers will see rising construction costs, which could eventually be passed on to real estate owners and tenants — and ultimately customers and clients. This compromise could have helped to advance the county’s goals of enhancing sustainability initiatives by meeting long-term recycling goals for construction materials and supporting LEED attainment for new construction. This represents a missed opportunity by the Board to further grow and develop the county,” said Jim Corcoran, CEO of the Fairfax County Chamber of Commerce.

EnviroSolutions planned to install solar panels at the landfill site, if the application was approved.

But many community members were opposed to the application, including the berm that would have been built around the landfill.

Mount Vernon District Supervisor Gerry Hyland was among the supervisors who voted to deny the application, calling it a difficult application.

“To say this application has given me some heartburn is an understatement,” Hyland said at the meeting.

Sharon Bulova, chairman of the Board of Supervisors, was among the four who voted to approve the application.

“The extension of the life of the landfill helps Fairfax County meet its revitalization and redevelopment efforts, particularly in the Route 1 corridor. While developers are recycling more and more from their projects, we are not yet able to recycle all debris and close by landfill options, or this option, in my mind provides developers a low cost option for ways of disposal,” Bulova said.

Several supervisors, including Jeff McKay and Pat Herrity, expressed concern that the application was not ready.

“This has been an unfortunate, long, torturous process for about everyone in this room,” said Lee District Supervisor Jeff McKay.