If approved by Board of Supervisors, Lorton landfill will operate until 2034. 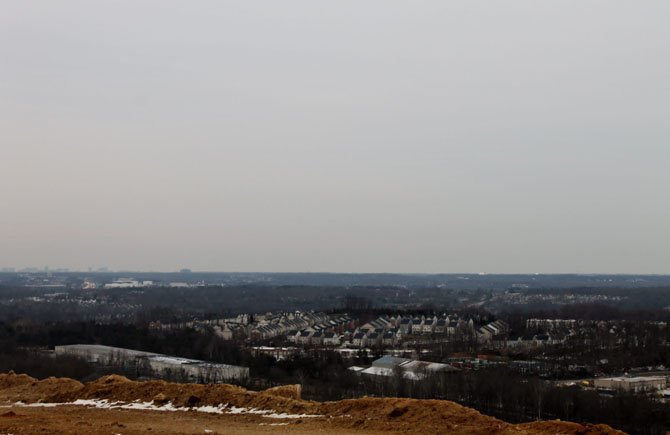 A view from the top of the landfill in Lorton. If the new application is approved, the landfill will operate until 2034. Photo by Janelle Germanos.

Before a public hearing on May 13 in which over 99 people signed up before the Fairfax County Board of Supervisors regarding an application to extend the life of the Lorton landfill until 2034, Frank McDermott, an attorney representing EnviroSolutions, said he had never experienced such nastiness and misrepresentation in a land use case.

The EnviroSolutions application to extend operation of their construction landfill until 2034 has led to controversy in the Lorton community and beyond. Despite months of debate, the decision was deferred by the Board of Supervisors to June 17.

Although an application was approved in 2006 for the landfill to close in 2018 and build a park on the site, that has fallen through due to liability issues. In addition, the applicant says that the landfill will not reach capacity by 2018.

But homeowners and other Lorton citizens say they’ve had enough of the landfill, and want it to close in 2018 as previously decided. Many are also upset that EnviroSolutions is not sticking to its original approved application in which a park would be built on the landfill after it closed in 2018.

“The landfill issue is a problem, not only for my business, but all business in Lorton,” said Jacquelyn Nunez of Exit Realty Associates and Lorton Station Merchants Association.

Property values are negatively affected by the landfill, opponents argue. Some mentioned the stigma Lorton has received as the home of the former DC prison, and the stigma it is currently receiving as a “gateway to trash.”

“We’d like to see an image change. And we don’t believe keeping that landfill would help the image change,” Nunez said. “We want what the other parts of Fairfax County enjoy-property without trash.”

Lorton residents Martin Rizer, Nick Firth and Bill Lynch all spoke at the public hearing in opposition to the EnviroSolutions application.

SUPPORTERS OF THE APPLICATION cite its green energy components, which includes the construction of wind turbines, solar panels and geo-thermal capacity.

“This landfill is a component of the economic redevelopment on Richmond Highway, as well as the development of Tysons, Reston, and other commercial centers,” Doughtery said, echoing supporter’s concerns that if the landfill is closed, construction debris in Fairfax County would have to be transported far away, doubling the cost.

Many Lorton citizens, including Nick Firth, president of the South County Federation, and Larry Clark of the Spring Hill Community Association, are opposed to the application because they say the green energy components that EnviroSolutions is proposing are an example of “greenwashing.”

If EnviroSolutions does not build the green energy components, they must pay the county a total of $10 million.

Instead of wind turbines and other green energy components, Lorton will be left with a landfill, says Bill Lynch, whose business park is near the landfill. Lynch says the green energy is a smoke screen for what the application actually is-the extension of a landfill-and that EnviroSolutions can easily buy their way out of the green energy park.

Lynch is also concerned with the 70-foot berm that will be constructed if the application is approved.

And some residents are upset that the landfill will continue to be the gateway to Fairfax County.

“Every time you pass by one of the wealthiest counties in the nation, this is what you’ll see,” Firth said at the hearing.

The Fairfax County Board of Supervisors held a public hearing on the EnviroSolutions application to extend operations of the Lorton landfill until 2034 on May 13. The hearing lasted late into the night and ended with a deferral of the decision to June 17.

The Mount Vernon Group of the Sierra Club recently changed positions on this issue, writing in a letter on May 8 that they are concerned with some aspects of the EnviroSolutions application.

“Given ESI’s recent history, we are concerned that the County would end up with a larger landfill and no renewable energy benefits. Coupled with the fact that ESI recycles only a small portion of the construction and demolition debris (CDD) at this site and that at least half the CDD they landfill is from out of state, this casts serious doubts on the so called “green aspects” of the project or its economic benefit to Fairfax County,” the letter stated.

The majority of Lorton residents who spoke at the meeting voiced their opposition to the application.

“George Mason would roll over in his grave if he knew what you were doing,” said Philip Hirschkop of Lorton about the founding father and prominent Lorton resident.