Landfill public hearing is on May 13. 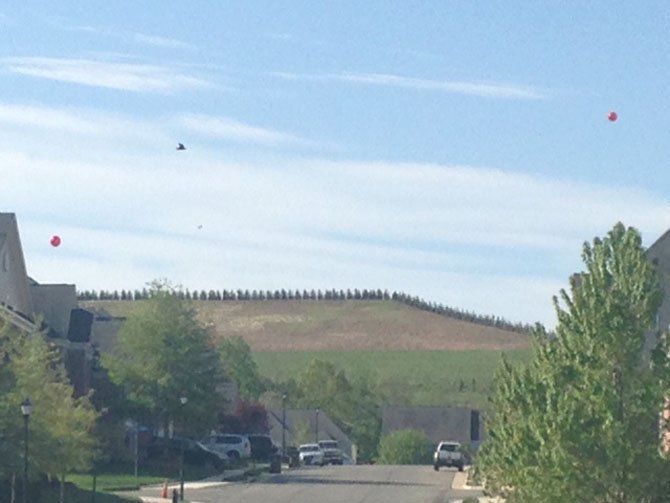 Balloons were flown May 2 to demonstrate to the community just how tall the proposed debris height, wind turbines and berm will be. In this picture, the height of the wind turbines is shown. Photo Contributed

If the EnviroSolutions application to extend the life of the landfill in Lorton is approved by Fairfax County Board of Supervisors on May 13, just how tall will the debris look to those from the ground? Just how tall is 395 feet, anyway?

The proposed height was demonstrated to anyone within the general Lorton area on Friday, May 2, who could catch a glimpse of the landfill off of Interstate 95 and Furnace Road when a balloon test was conducted.

Balloons were flown to give residents a general idea just how tall the landfill and 70-foot berm will be if the current application is approved.

THE BALLOON TEST occurred a week and a half before the Fairfax County Board of Supervisors is holding a public hearing on the application to extend the life of the landfill past the previous agreed upon date in 2018. Mount Vernon District Supervisor Gerry Hyland is opposed to the application.

The EnviroSolutions application to extend operation of the landfill until 2040 was the subject of a planning commission public hearing in late February that lasted until 3 a.m.

Many Lorton citizens, including business owner Bill Lynch, are opposed to the application because they say the green energy components that EnviroSolutions is proposing in return for being able to keep the landfill open past 2018 are distractions.

“It’s a smoke screen to cover up massive expansion,” said Lynch, whose office at Gunston Commerce Center is nearby the landfill.

Some citizens, including South County Federation president Nick Firth, disapprove of the new application because a 2006 EnviroSolutions application was already approved in 2006, in which a park would be built on the landfill after it closed in 2018.

But Conrad Mehan, EnviroSolutions’ director of government relations, has said that due to liability issues, they are unable to take ownership of the park.

When the application was voted on at the April 3 planning commission meeting, commissioners added on a list of issues they believe the Board of Supervisors should look at before approving the application.

The height of the proposed wind turbines were demonstrated during a balloon test on May 2.

Mount Vernon Planning Commissioner Earl Flanagan voted against the application, citing a number of concerns and saying the landfill did not serve as the proper gateway to Fairfax County and that wind turbines could negatively affect the bald eagle population at nearby Mason Neck State Park.

“There are more benefits to the county by denying than approving this application,” Flanagan said.

Lynch, who plans on speaking at the public hearing on Tuesday, cites the buyout provisions in the new application. For example, if EnviroSolutions fails to provide infrastructure for the solar component, they must pay $3 million to Fairfax County.

Lynch believes it is easier for EnviroSolutions to just pay the buy-out provisions, so the green energy components will be nonexistent and the community will be left with a landfill.

But Mehan said in an interview in March that EnviroSolutions is committed to the green energy components.

“Because they brought this up, there’s a penalty cause in the application, that if for whatever reason, we do not install and operate one of the four green energy technologies, we have to pay money. It’s the equivalent of what it would cost for us to do it,” Mehan said.

THE PUBLIC HEARING will take place on May 13 at 4:30 p.m. in the board auditorium of the Fairfax County Government Center.