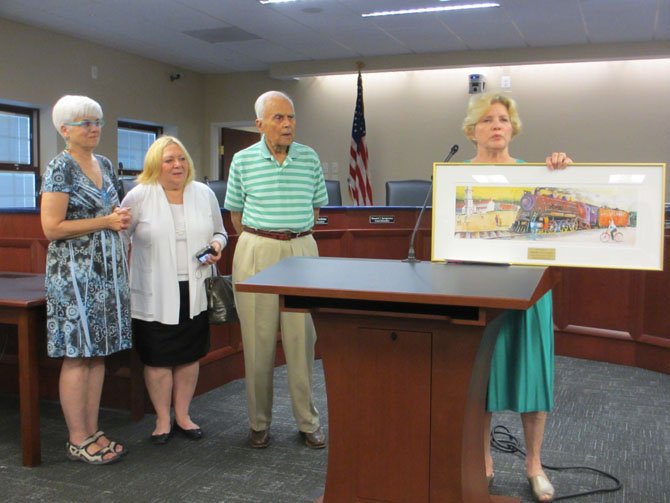 Town of Vienna officials and staff and invited guests paid tribute to Vienna’s late mayor, M. Jane Seeman, on June 2 in Town Hall chambers. The reception and recognition were held in the hour prior to the scheduled town council meeting. The chamber was crowded with colleagues, friends and immediate family of Seeman who died in February. At the reception, the official portrait of Mayor M. Jane Seeman, by Vienna photographer T.R. Cook, was unveiled. It will hang in Town Hall.

“I loved knowing her,” said Petersen. “Like the red caboose, she was synonymous with ‘Vienna.’”

Keam described the General Assembly resolutions passed in Seeman’s honor. The first recognized her retirement, the second her passing. The memorial resolution was given to the Seeman family, as was the flag flown half-staff upon Seeman’s death.

One of Seeman’s sons, Bill, took the podium on behalf of the family to thank the community for its support.

“The outpouring of love takes my breath away,” said Bill Seeman.

Grace Rooney of the Vienna Arts Society presented a print of the well-known mural painted on the train station by Vienna artist Harris Miller. Miller, VAS president Lu Cousins and VAS artist Mary Ellen Larkins accompanied Rooney as she donated the framed print to the Town in memory of Seeman.

The framed artwork presented is one of a limited number of prints made from Harris's painting.

The Vienna Volunteer Fire Department Auxiliary prepared and donated petite sandwiches and a selection of desserts for guests.