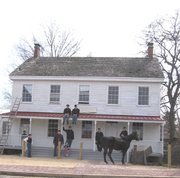 Freeman Store, dating back to the Civil War, has played a role in Vienna history for 150 years. Called the Lydecker Store during the Civil War, the building was used by Union and Confederate troops. Photo is of the 2011 re-creation of iconic photo taken circa 1862.

The Freeman Store, whose history goes back to the Civil War, became the first historic landmark in Vienna to be named to the Virginia Historic Register. The recognition was approved by the Virginia Department of Historic Resources [DHR] on Sept. 22, 2011.

"Any time a building in a community gets historic designation, it’s a sign of pride in the community," said Sarah Jane Brady, a Freeman Store advocate instrumental in the pursuit of historic status for the property. "For Freeman Store, it reminds us of the role the building played in our history during the Civil War and beyond."

THE FREEMAN STORE AND MUSEUM, at 131 Church Street NE, is owned by the Town of Vienna and its operation administered by Historic Vienna, Inc. under a lease with the town.

What is now known as the Freeman Store was built in 1859 as Lydecker Store. During the Civil War Lydecker Store was used as a base for both the Union and Confederate armies, including its use as a hospital. Vienna, unlike most of Virginia, voted against secession in 1861.

After the Lydeckers and Freemans were joined in business through marriage, the Freeman family eventually took over the building. Leon Lydecker Freeman, took over the store from his father in 1894. He held several "firsts" in Vienna. Freeman was the first president of Vienna’s volunteer fire department. He was elected Fairfax County‘s first Republican Delegate to the Virginia General Assembly since the Civil War.

For reasons unknown – Brady speculated the Great Depression or retail competition – Freeman closed the family store in 1929, but the building remained as an insurance agency and home.

Leon Lydecker Freeman died on Sunday, Feb. 9, 1941 at 69 years old. His funeral was held at Vienna Presbyterian Church, with burial in the Flint Hill Cemetery in Oakton. Freeman’s wife Hattie Belle survived him.

Leon‘s oldest daughter Dorothy and her husband Lauris Sherburne lived in the house, operating their insurance business from it until the mid-1950s. In 1969, Dorothy sold the house for $72,000 to the Town of Vienna. It was used as residence into the mid-1970s.

In February of 2010 Historic Vienna, Inc. submitted a Preliminary Information Form to the Town of Vienna for support. By late fall, the PIF had been approved, and HVI and the Town of Vienna, in partnership, hired a contractor to complete the exhaustive documentation that the Virginia Department of Historic Resources [DHR] requires for evaluation. The contractor began its work in January of 2011. The project was completed in late spring and submitted to DHR in late summer. At its Sept. 22 meeting, the DHR approved Freeman Store’s application for official inclusion on the Commonwealth’s historic register.

The plaque dedication program begins at 2 p.m. on the front porch of The Freeman Store and Museum, 131 Church Street NE.

Following the unveiling ceremony, Historic Vienna, Inc., and the Town of Vienna, will serve refreshments on Freeman Store lawn.

"Freeman was so many things in Vienna," said Brady. "He was a bank president, started the volunteer fire department, served as mayor and in the Virginia House of Delegates. He was like the ‘everyman’ in town.

"He was also a very proud Lion."