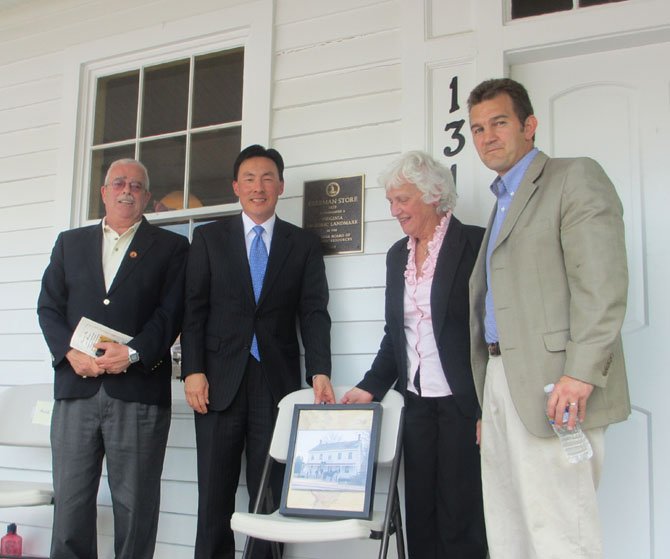 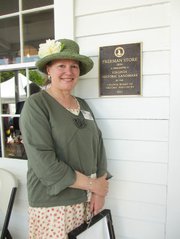 HVI president, Anne Stuntz, with the newly-unveiled plaque naming the Freeman Store to the Commonwealth of Virginia Historic Register.

More than 100 members of the Vienna-area community and a cast of local dignitaries took part in the program at Freeman Store on April 21 at which the plaque commemorating Freeman Store’s historical designation in the Commonwealth was unveiled.

" … We have to remember what happens when the glue that holds society together falls apart," said Connolly."

THE FREEMAN STORE is the first historic landmark in Vienna to be named to the Virginia Historic Register. The recognition was approved by the Virginia Department of Historic Resources [DHR] on September 22, 2011.

Seeman recognized Vienna Volunteer Fire Department volunteer Tom Bonner for 50 years of service to the department. Bonner was accompanied by VVFD president Bob Zillian and Auxiliary president Joan Dempsey, all in full dress uniform on a hot, humid day. Del. Keam, on Virginia’s Sesquicentennial Commisson of the American Civil War, brought a note of levity when he honored Vienna historian Mayo Stuntz for his research of the area, and, for "producing" Anne Stuntz, Historic Vienna, Inc. president.

Petersen, whose college thesis was on the origins of the Civil War, alluded to the conflict as a test of the "great American history of democracy."

Known as Lydecker Store when it was built in 1859, the building was used during the Civil War as a base for both the Union and Confederate armies, including its use as a hospital. Vienna stood its Union ground and, unlike most of Virginia, voted against secession in 1861.

The Lydeckers and Freemans were joined in business through marriage soon after the Civil War ended and the Freeman family eventually took over the building. Leon Lydecker Freeman took the reins from his father in 1894. He was the first president of Vienna’s volunteer fire department, and was elected Fairfax County‘s first Republican Delegate to the Virginia General Assembly since the Civil War.