Vienna Idol raised over $13,000 for the Khristin Kyllo Memorial Fund.

Of more than 35 contestants auditioning for Vienna Idol throughout the spring, it came down to six finalists competing on the Town Green Friday night, June 6. Of the six, three were voted “super-finalists,” but there can be just one Vienna Idol. And 9-year-old Sophia Manicone, with her booming Broadway voice, was voted the 2014 Vienna Idol. 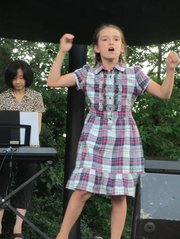 “It hit me last year that although it's wonderful to celebrate the ‘winner,’ special thanks go to all our contestants who give so much to raise money for such a wonderful cause,” said Vienna Idol producer and owner of Caffe Amouri, Michael Amouri.

When Amouri announced second-place winner, and, it was clear which of the singers would hold the title of this year’s Vienna Idol, Sophia’s friends, sitting stagefront, pounced on her screaming with joy. Sophia herself was stunned, her eyes opening wide, hand over her mouth. Back onstage, though, to receive her $500 check, she was the professional entertainer once again. Confident, bubbly and articulate.

THE VIENNA IDOL finals drew a crowd of 500 to 700 people on the Town Green Friday night, June 6. The six finalists combined to raise more than $5,300 from the finals’ lawn “votes.” More than $13,000 was raised from Vienna Idol in 2014, from sponsor contributions to “jug” donations and individual donations.

“I always imagine a time, some 20 years in the future, when a family, perhaps living on Beulah, is gathering for dinner and the mom or dad says ‘you know, we have all this because of a young lady we never met -- Khristin Kyllo,’” said Amouri. “I went to college because of her, something I might not have been able to do. We owe her a debt of gratitude.’" 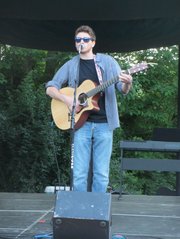 Jason Saitta, with a bluesy voice and nimble guitar-playing, came in third in the 2014 Vienna Idol competition.

Khristin died of complications from epilepsy at the end of her first semester at Princeton University in 2010. She was a James Madison High School graduate and a softball stand-out. Amouri coached Khristin at Madison in basketball.

Vienna’s late mayor M. Jane Seeman was passionate about the construction of the Town Green.

From the stage, Amouri recalled Seeman’s remark when the first Vienna Idol debuted on the Town Green. “’This is what the Town Green was made for,’” Amouri reported Seeman as saying.

AMOURI PRAISED Vienna Idol sponsors, particularly Whole Foods and the Rotary Club of Vienna, and singled out his project manager, Celia Blalock, calling her the “conductor.” She keeps the train on the tracks, he said.

“Whole Foods is a national business who puts their money where their mouth is,” said Amouri. Whole Foods donated more than $5,000 from its May “Vienna Idol” day. “They’re amazing,” said Amouri.

Amouri hopes Vienna Idol will become a Vienna tradition. He says that one of the “cool things” about Idol is that it pulls together the community, from the judges who juggle multiple professional tasks to make it there to judge auditions to the people who cheer on the finalists on the Town Green.