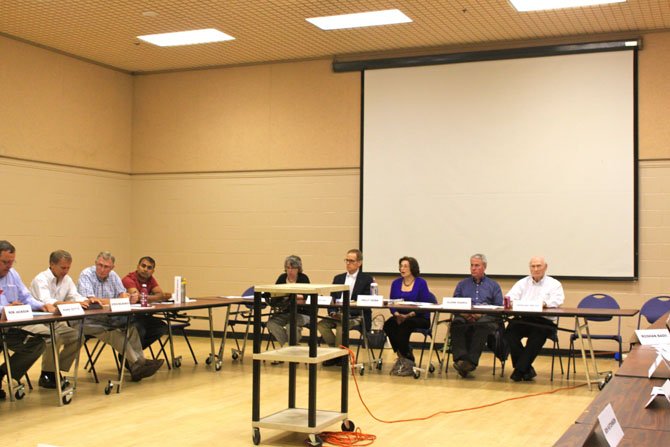 The McLean Citizens Association voted to support a new traffic light near Westgate Elementary School during the June 4 meeting. Photo by Reena Singh.

Drivers taking a shortcut on Magarity Road to get to work in the morning may find a traffic light to aid the crosswalk guard in the future.

The McLean Citizens Association voted unanimously - with one abstention - to support adding a traffic signal at the intersection of Magarity and Peabody roads near Westgate Elementary as a safety measure for children at the June 4 meeting.

Board of Directors member Animesh Gupta said he and his child were almost hit by a car last month as they crossed the road to the school.

The McLean Citizens Association voted to support a new traffic light near Westgate Elementary School during the June 4 meeting.

According to the resolution, the measure is supported by parents in Pimmet Hills, Olney Park, the Commons of McLean-Pimmit Citizens Association, and the Westgate Parent-Teacher Association.

Parent and Westgate PTA President Kathy Timmons said the volunteer traffic guard has little control over the cars that pass through the area.

“Drivers do not obey the speed limit during school hours and drive too fast on the road,” she said. “It's hard for the crossing guard to keep control of the traffics because people don't pay attention to her.”

Timmons said the traffic is only going to get worse when the Metro stations open this summer.

“Magarity road is becoming more congested due to the construction with the metro and will get worse when the metro opens,” she said. “The safety of our children is very important and making sure they get to school safely. The school is currently under renovations therefore the Kiss ‘n Ride has been moved to the front of the school on the side parking lot. This causes more congestion, because every student is being dropped off in the front.”

Gupta said he approached Virginia Department of Transportation about creating safety measures so that the children - who are often below the height of the windshield - are not at risk of being hit by a car. Additionally, he said when a car does stop, many other vehicles use the center turn lane to try to pass it without knowing why they are stopped. The resolution states that VDOT did not do a proper study of the pedestrian traffic and vehicle volume in the area and asks for another one to be made.

Representatives from VDOT were not immediately available for comment or to estimate how much a traffic signal would cost to install.

Gupta has written a petition at http://www.ipetitions.com/petition/walksafely-on-magarity/ that nearly had 150 signatures by Sunday to gain support in the community for added safety measures that include speed bumps and a walk signal.

The next MCA meeting will be held July 2.