First Responders Honored for Going ‘Above and Beyond’
Votes

First Responders Honored for Going ‘Above and Beyond’ 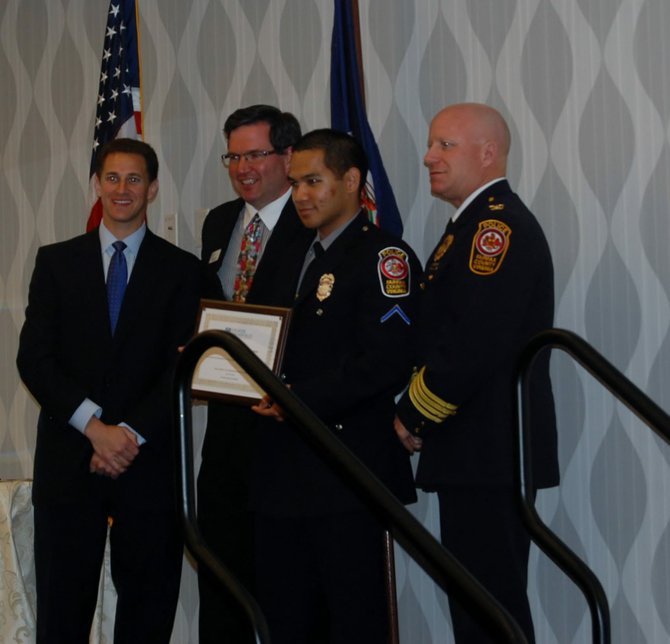 Officer Long Dinh, Jr., third from left, was one of the first responders honored at this year’s Above & Beyond: First Responders Benefit Lunch hosted by the Greater Springfield Chamber of Commerce. Photo by Janelle Germanos.

Being a first responder is stressful enough, but the first responders who were honored at this year’s Above and Beyond: First Responders Benefit Lunch excel at their jobs and more.

"Above and Beyond" Honorees 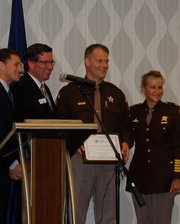 Four outstanding first responders were honored at this year’s Above and Beyond: First Responders Benefit Lunch.

Four outstanding first responders who truly go above and beyond were awarded this year. Rep. Gerry Connolly, Fairfax County Chief of Police Edwin Roessler, and Fairfax County Sheriff Stacey Kincaid were presenters at the event. Jeff Goldberg, the Virginia bureau chief for ABC7/WJLA-TV, served as the narrator for the event.

The honorees included Master Deputy Sheriff Rodney Harrison, who has been working in the Fairfax County Sheriff’s Office since 1987. In addition to showing great professionalism in his job, Harrison is active in his community as a Salvation Army bell ringer, serving 35 hours a week for six weeks during the holidays for the past 20 years. Every year, Harrison travels to Africa through his church on mission trips.

Auxiliary Police Officer Thomas Oliver, who has been volunteering for the police department since 1999, was also honored at the event. Not only does Oliver serve the police department by helping with traffic stops and events, but he also goes above and beyond by participating in over 70 vehicle and crime prevention events in the community in 2013.

In February after responding to a domestic call, Officer Long Dinh, Jr. was critically injured after a head-on collision with the case’s suspect. Dinh received traumatic brain injuries, but is working hard to return to work as a police officer, and returned this March in light capacity. Dinh was another recipient of the “Above and Beyond” award.

“In the course of their work protecting our community and our neighbors, our honorees see unfilled needs and, in their off time, they fill it,” said Michael Drobnis, chair of the Greater Springfield Chamber of Commerce Above and Beyond Awards. “They go above and beyond and we are honored to have them as part of our community.”