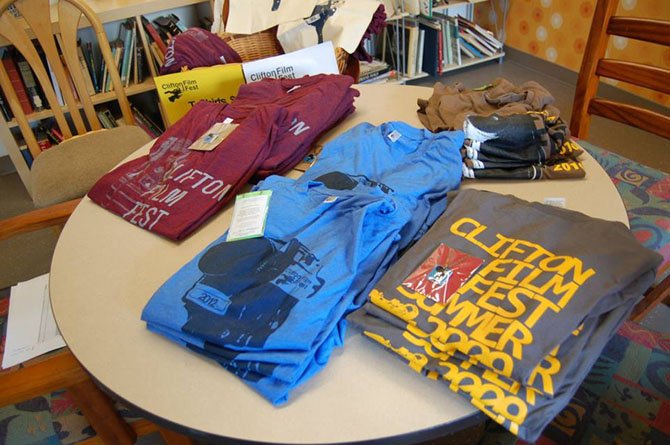 T-shirts from past Clifton Film Fests. The group has a Kickstarter campaign to raise money for this year’s t-shirts and other supplies going until July 4. Photo Courtesy of Clifton Film Fest

For anyone interested in checking out some local creative talent, consider the upcoming Clifton Film Fest, which will feature work from filmmakers around the area.

The Clifton Film Fest is Saturday, July 19, and a Kickstarter campaign to raise funds for the event is underway until July 4.

Funds raised from the campaign cover t-shirts and the VIP area for the filmmakers, as well as a red carpet area where they get interviewed.

This year’s festivities include a day showing and a night showing of select titles.

The deadline for films is July 2. The festival is divided into an 18 and under category, and 19 plus.

“It’s a community-organized event and is really for the kids,” said Dani Weinberg, founder of the Clifton Film Fest.

Weinberg started the film festival partly to give young people in the area a chance to enter a film festival without traveling all the way to D.C.

“It’s definitely unique because it’s outside,” Weinberg said. “We try to bring the feel of an outdoor movie night, but instead of being a film they’ve already seen it’s an original film.”

The festival started in the town of Clifton, but soon outgrew it and moved to the Workhouse Arts Center in Lorton. The Workhouse is one of the event’s main sponsors.

“It’s really cool when the community can see your work and you can see their reaction,” Weinberg said.

For information on the Kickstarter and details on the festival, visit https://www.kickstarter.com/projects/daniweinberg/clifton-film-fest-2014.