“Boyish mistakes are one thing. We must all learn and grow from them. And it is the measure of a man, not a boy, how he holds himself accountable for those mistakes,” said the Invisible Man in “Man Made Boy.”

This quote from Jon Skovron’s latest novel, “Man Made Boy,” summarizes its central theme: the journey of a young boy-monster maturing into adulthood.

Skovron will showcase “Man Made Boy” at the Potomac Library’s author talk on March 29 at 1 p.m. The library is located at 10101 Glenolden Drive.

In “Man Made Boy,” Frankenstein’s 16-year-old son, Boy, leaves the safety of underground monster enclave beneath the busy streets of Times Square after a conflict erupts at home. He decides to go on a cross-country trip with the granddaughters of Dr. Jekyll and Hyde who introduce the shelter Boy to “malls and diners, love and heartbreak.”

Eventually, Boy’s past demons — both literally and figuratively — catch up with him and force him to face the past including his family.

“His world view is widened drastically as the story progresses and I hope that some of the younger readers have their own views broadened at the same time,” Skovron said.

Skovron’s inspiration for “Man Made Boy” originated from a short story he was writing about a Broadway Theater Company secretly comprised of monsters who pretend their abilities are special effects.

“But as I was writing it, I got more and more interested in what was going on backstage — which as any theater person will tell you, is where the real drama happens anyway. I became particularly interested in the head of security, Frankenstein’s Monster and his family,” he said.

“Ultimately, as the title suggests, it’s about a boy learning to take responsibility for his actions and grow into a man. Even though, technically, he’s neither a boy nor a man,” Skovron said.

During the seven years it took him to write the novel, his biggest challenge was figuring out the plot. However, he credits his agent and friends with helping him talk it through.

Despite the madness of pinpointing a specific plot, he enjoyed the research and writing involved in creating the novel. Skovron wanted to ensure that his monsters reflected the diversity of our modern world.

“Most of the focus of monsters in pop culture is European, so I wanted to bring in monsters from other cultures, from Japan, Mexico, China and some others. I also wanted to bring in some more classical monsters, like Medusa, the Siren, and the Minotaur,” he said.

In addition to all the monsters, “Man Made Boy” also includes one character that is purely digital.

“I wanted to find a way for her to be able to directly affect the real world,” he said.

Through his research on parasitic mind control, current cybernetic technology, and some “… of the more far-fetched theories in wetware, or biohacker communities,” he was “able to knit together a semi-credible way for her to do it.”

“Man Made Boy” also touches on some of the same themes in Mary Shelley’s classic “Frankenstein” novel, such as “questions about the morality of science and the responsibility of a creator to his or her creation.”

“And of course, I hope some readers who may not be familiar with the source material, particularly ‘Frankenstein,’ ‘The Strange Case of Dr Jekyll and Mr. Hyde’ and ‘The Invisible Man,’ might go check out the original works,” Skovron said.

After finishing up the sequel to “Man Made Boy,” he spends his time showcasing his latest novel at literary venues nationwide such as the NoVA Teen Book Festival in Arlington, Va. 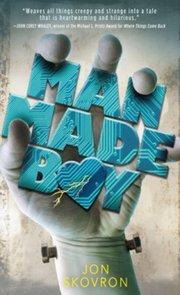