Election results will be released on April 8. 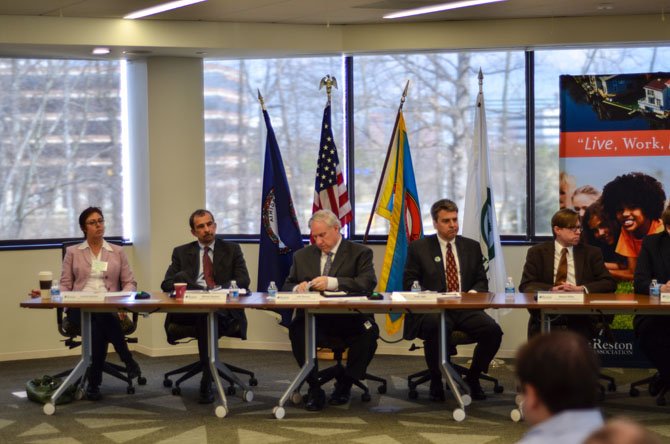 On March 15, Reston Association had a public meeting so people could meet the candidates running for seats on the Reston Association Board. From the left: Lucinda Shannon, Michael Mackert, Jeffrey Thomas, Andy Sigle and Mason Miller. Photo by Ryan Dunn.

Each spring Reston Association members are given the opportunity to elect three new individuals to the Board of Directors. The annual election process is overseen by an Elections Committee, members of which are appointed by the Board of Directors. Members of this year’s committee include Ed Robichaud, Sam Stalcup, and Caren Anton. On the morning of Sunday, March 15, the Reston Association had a public meeting so people could meet the candidates at the Sunrise Valley Drive office.

“A person can run for two consecutive terms, and then you have to take one term off,” said Ken Knueven, Board President for the Reston Association. The candidate for the Hunters Woods/Dogwood District is Lucinda Shannon, who is running unopposed. “When I decided to run, I did not want to run against people with the same values as me so we formed a group,” said Shannon. Colin Mills, candidate for the three year term at-large position and Rachel Muir, candidate for the one year term have been working with Shannon to promote each other’s platforms in this election. “If the three of us are elected we will have a stronger voice on the board,” said Shannon.

The only incumbent running for re-election is Andy Sigle, who is running for a three year term. In his candidate statements, Sigle stated he wanted to focus the RA board on the goals of increasing engagement with the overall community to accurately understand and represent Reston’s interests. Mason Miller, another at-large election candidate said he was impressed with how the Reston Association helped with the candidacy process. “They [the Reston Assocation] have been very accommodating to help candidates file petitions,” said Miller.

Knueven was encouraged by the number of candidates running in the election for the RA board. “This year the election was much more transportation and development oriented,” noted Knueven. “The RA staff had done a great job helping the candidates and have made the process easy,” said Jeffrey Thomas, a candidate for the at-large position. “Reston twenty years from now will look very different from what it looks like today,” said Thomas. “The framework we put in place now will be what drives things for the next ten years.”

Candidates running for a one year term are Gerald Volloy and Rachel Muir. Candidates for the at-large election position of three years include Michael Mackert, Jeffrey Thomas, Andy Sigle, Mason Miller, and Colin Mills. All voting for Reston Association candidate must be received by the counting agents by 5 p.m. on March 31. Reston residents can choose one method of voting, either mail or Internet. Results will be announced at the Annual Member’s Meeting on Tuesday, April 8 at the Reston Association office.

For more information on the Reston Association, visit www.reston.org.