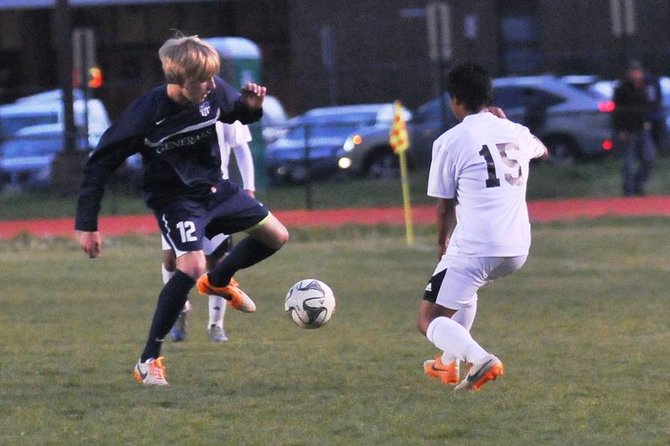 Washington-Lee junior Jacob Campbell, left, and the Generals remained undefeated with a 2-0 victory against Mount Vernon on Monday. Photo by Louise Krafft.

Lightning forced the Washington-Lee and Mount Vernon boys’ soccer teams off the field Monday for an hour-long delay.

When the Generals and Majors returned to action, one team came out ready to work, while the performance of the other group led to its head coach calling the team "lazy."

W-L sophomore Maycol Nunez scored off a Michael Katz corner kick in the 34th minute, Katz added an insurance goal moments later and the Generals defeated the defending state champion Majors 2-0 in a weather-shortened match at Mount Vernon High School. With the victory, W-L wrapped up the National District title. Teams from the former National District have continued recognizing a champion after the VHSL's six-class realignment based on record against former district opponents. W-L, which is now in Conference 6, finished with a 5-0-2 record against teams from the former National District.

“We knew we had to put a couple goals in in case the game got cancelled,” Katz said, “so we came out, tried to win and won the district title.” 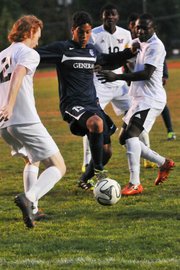 The game would eventually be called due to poor field conditions with 25:27 remaining in the second half, but not before the Generals scored a pair of goals. Play was originally suspended due to lightning with 23:15 remaining in the opening half and the teams locked in a scoreless tie. When play resumed, W-L took advantage of the wet grass field late in the first half as Nunez scored his team-leading 25th goal of the season off a Katz corner kick that came in low.

Nunez has been the Generals’ primary offensive threat this season.

“He’s quick on the ball, he’s got a low center of gravity,” head coach Jimmy Carrasquillo said about Nunez, “[and he] doesn’t get knocked off the ball too often.”

The victory improved W-L’s record to 10-0-2. The Generals have outscored opponents 43-8 and have held the opposition scoreless in seven contests.

Monday, W-L bounced back from an hour-long delay to take care of business. Meanwhile, Mount Vernon head coach Tony Garza, who won the 2013 AAA state title in his first season with the program, wasn’t pleased with the Majors’ effort. The loss dropped Mount Vernon’s record to 2-4-4.

“We’ve actually battled this all season long,” Garza said. “Since after the fourth game, it seems like, second half, the boys just come out like the game’s already over. They have no desire to finish playing the game. … We’re a very lazy team. I hate to be negative that way, but we’re a very lazy team. They’re still riding the high of last year’s state championship win, [but] that was last year, not this year.

“As you can see from today’s game, to every clear that we have, we are just basically jogging out while the other teams are forcing themselves out quickly, they’re quick to the ball [and] we’re just being reactive to everything. We’re just a lazy team right now.”

“I’m looking forward to seeing how far we can take it. I think this team does have the capability, does have that mentality of moving on, going far in our conference and in the region.”

“It’s going to be tough to beat us,” Carrasquillo said. “… I’m looking forward to seeing how far we can take it. I think this team does have the capability, does have that mentality of moving on, going far in our conference and in the region.”

*EDIT: In an earlier version, the quote, “We knew we had to put a couple goals in in case the game got cancelled, so we came out, tried to win and won the district title," was mistakenly attributed to Maycol Nunez.