Students and teachers bike to school. 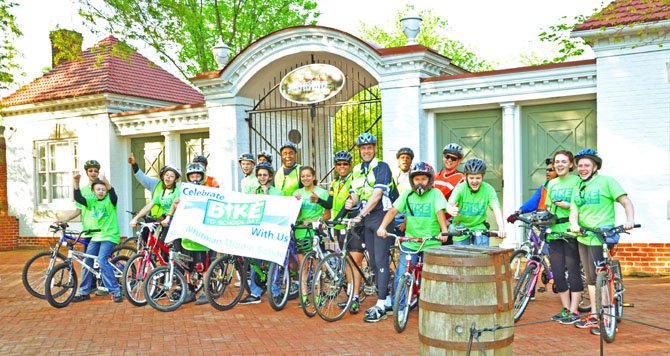 Walt Whitman Middle school students stopped at the Mount Vernon estate along the bike route on National Bike to School Day. Everyone was all smiles as they made a pit stop for water and a breather along the nearly 9-mile route to school. Photo by Veronica Bruno.

Walt Whitman Middle School was one of more than 30 Fairfax County public schools participating in National Bike to School Day on Wednesday, May 7. National Bike Day is part of the national program Safe Routes to School.

Whitman students wore matching, easily identifiable green shirts with the school name and current year on them so they were clearly seen by passing drivers and pedestrians.

The program is designed as an effort to promote greater physical activity and reduce traffic congestion, most especially in an area that heavily relies on cars to get to and from most locations. Bike to School Day was also a way to enjoy the area's trails and beauty while biking with teachers and friends from school.

Eighth graders Mary Ruscoe and Amanda Grimes are military-connected youths at Walt Whitman Middle school and live in the Fort Belvoir area. Mile marker 1 along their route was at the Mount Vernon Trail entrance at the estate. There the group took a break where a teacher and student helper met them with water. Students also got GU Chomps snacks at their next pit stop at Fort Hunt Park. The GU Chomps were donated by Fresh Bikes Arlington.

To prepare students and school officials for the exercise, the schools held planning and bike assemblies, compiled information packets and provided tips on its Safe Routes to School web page. Support also came in the way of bike helmet giveaways, bike valet parking, free bike charms and various receptions for participating students and their parents.

Regla Pino Perez, a school counselor at Walt Whitman Middle School was the organizer of the event for the school. After a water break, the biking group took off along the Mount Vernon Trail to Fort Hunt Park, en route to the final destination, their school.

Safe Routes to School was sponsored by a grant from the Virginia Department of Transportation. The program's goal is to encourage more physical activity for kids and to lessen the impact of cars in the area.

“While it is great to promote biking to school on one day, we would like to see schools regularly encouraging active transportation as the default for getting to school and reducing the number of cars in kiss and ride. With less traffic around schools biking and walking becomes much safer and reduces air pollution caused by idling cars waiting to pick up or drop off,” said Sally Smallwood, Safe Routes to School Coordinator for the FCPS Office of Safety and Security.