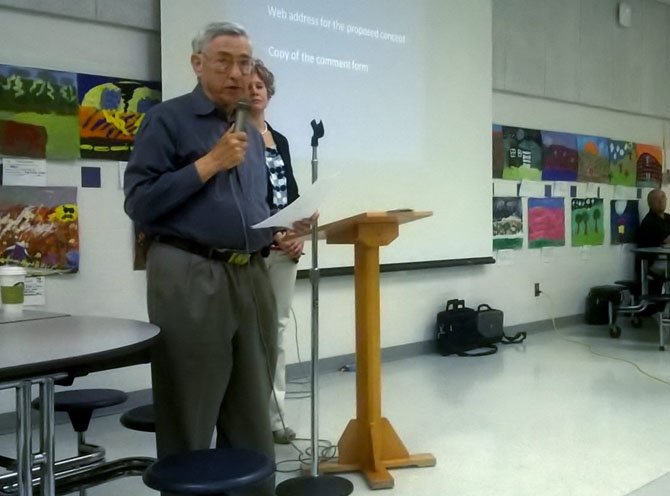 Steve Gell, former president of the Jewish Community Relations Council of Greater Washington, speaks against the proposed changes to the zoning ordinance. Photo by Janelle Germanos.

After a heated public meeting on a proposed change to the Fairfax County Zoning Ordinance, which would limit gatherings of more than 49 people to three times in a 40--day period in a residential dwelling, Leslie Johnson, the zoning administrator for Fairfax County, told residents she doubts the proposal will go any further, based on the feedback that has been received.

This came after every resident at the meeting spoke out against the change, which many see as unnecessary and an infringement on their rights to peacefully assemble.

Still, the proposal is set to be presented to the Board of Supervisors in June.

Michelle O’Hare, the deputy zoning administrator for Fairfax County, told residents that the proposal is a way to respond to incidents that have occurred in which there are large, frequent gatherings in residential areas.

CURRENTLY, the zoning ordinance does not define which size or frequency is appropriate at a residential dwelling. But many residents are concerned that the proposal limits the right to assemble and will cause legal issues for the county.

“While there have been some complaints about frequent and large gatherings creating issues such as lack of parking, noise, and traffic, I have serious concerns about such a sweeping change to the zoning ordinance,” Supervisor Pat Herrity (R-Springfield) said in a statement in his regularly-issued Herrity Report. “I believe the County is risking a lawsuit and/or a Constitution challenge by interfering with peoples' right to assemble.

Also taking issue with the proposal is the Jewish Community Relations Council of Greater Washington, the JCC of Northern Virginia, Temple B’nai Shalom in Fairfax Station, and several other synagogues in the area.

Stephen Gell, former president of the Jewish Community Relations Council of Greater Washington, spoke against the ordinance at the meeting.

“There is an obligation in many Jewish homes to erect sukkot, which could result in having more than 50 people over,” Gell said.

In addition, a letter to the Fairfax County Department of Planning and Zoning from the JCRC cited other concerns religious communities have with the proposal.

“Jewish mourning rituals or ‘shiva’ calls for seven days of mourning by family members in their home. The congregation, family and friends are called to participate in prayer and support for the bereaved. These gatherings on occasion may include more than 50 individuals participating,” the letter stated.

According to administrators at the meeting, there have been 12 complaints of large gatherings within the past year.

Residents argued that the proposal would punish everyone for violations made by a small group of people.

“While there have been a number of complaints about group assemblies they have been relatively few,” Herrity stated.

ALSO AT ISSUE, opponents at the meeting argued, is who would enforce the regulations and how much it would cost the county. According to Herrity, there are existing ordinances that can be used to address problems such as noise and parking.

According to Johnson, the Board of Supervisors asked the zoning staff to look at developing a new proposal. She would not, however, tell residents the specific supervisors that asked for such a proposal.

Proposed changes to the noise ordinance were also discussed at the meeting. According to Lorrie Kirst, the senior deputy zoning administrator, the two main goals of the proposed ordinance are to minimize night time noise and to guarantee a quiet environment for residents.

While some residents, including Joyce Harris of McLean, have complained that noise caused by loudspeakers in their neighborhoods is getting to be too loud, the JCRC also cited concerns with the proposed noise ordinance.

“While the goals of both of these ordinances are meritorious, these proposals as written would have a direct negative impact on our religious observances and some of our routine activities,” the letter stated.

The public meeting on May 19 was the final of three meetings, but the proposal will be presented to the Board of Supervisors in June.