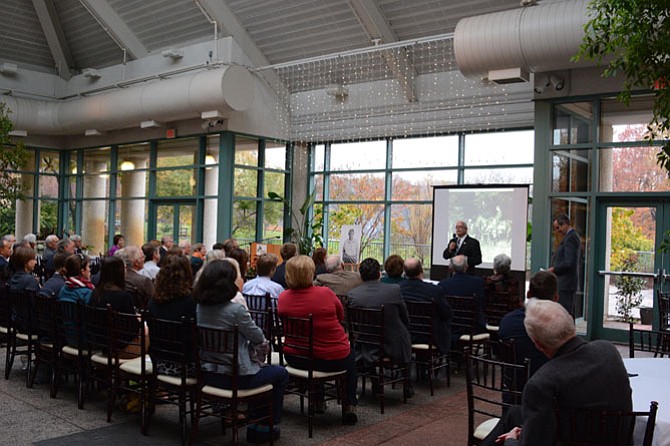 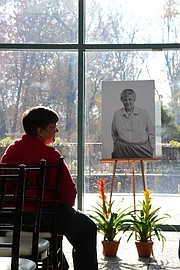 Jean Packard was Frank Roberts’ first boss. He was 13, she was 22 and the acting editor of her father Dave’s Clermont Sun newspaper in Batavia, Ohio. “I was a ‘devil’s rat,’” Roberts said, responsible for odd gofer jobs around the office. “I was trying to hide from work and she’d track me down. She was a tough boss.”

Packard was perhaps more well known for serving as the first female chairman of the Fairfax County Board of Supervisors (1972-1976), founding and chairing the Northern Virginia Conservation Trust, and being a passionate environmental civic leader in Fairfax County for the past five decades.

She died in her Fairfax home on Oct. 21 of congestive heart failure.

Roberts was among nearly 200 elected officials, civic leaders and friends of Packard who gathered Nov. 6 in the Meadowlark Gardens Atrium to remember the 92-year-old.

In the early afternoon, clouds passed and sun shone while rain continued to fall.

“I love it, it’s beautiful,” said Roberts. “She’s beloved and highly regarded by so many people. She lived without any apparent need for self-glorification and was committed to the community, other people.”

Among her myriad citizen organization positions, Packard sat on the board of the Northern Virginia Regional Park Authority (now NOVA Parks) for 24 years. Her late husband Fred was the first director of the Fairfax County Park Authority, as well as that organization. The current NOVA Parks Executive Director Paul Gilbert spoke to open the formal portion of the afternoon.

“She was a remarkable woman who leaves a remarkable legacy,” he said. “Her stride really was as a citizen-leader. She understood how to affect policy, in any position, not necessarily a formal position of power.”

WHILE ON THE BOARD of supervisors, Packard was instrumental in protecting the Occoquan Reservoir. “You’d never know all this about her; she’s so humble,” said her next-door neighbors Erik and Helen Burvis. “She was always so positive, never complained.”

Gilbert connected her effectiveness in positions that included Governor appointee to the Virginia Soil and Water Conservation Board (2002-2010) and President of the Fairfax County Federation of Citizens Associations to her personality and way of dealing with people.

“She was an authentically kind person who actually bore no grudges or let it get personal,” he said. “She was passionate, but didn’t micromanage her vision. She was light on obsessing over details, so if her larger goals were being met, she was fine.”

Current Board of Supervisors Chairman Sharon Bulova echoed Gilbert. “She was genuine, the real deal,” she said. “She doesn’t just lead, but has rolled up her sleeves and gotten into it with you. She’s picking up trash and then adopting policy.”

Recently re-elected U.S. Rep. Gerry Connolly (D-11) spoke about Packard’s keen ability to move a meeting along, and how she projected what she believed in.

Jim Darracott of Falls Church city worked with the younger Jean for the ambulance service and has known the pair for 30 years. He said that even up until her death, civic engagement was incredibly important to Packard.

“Jean sent in her absentee ballot a week before she passed,” he said. “That was so Jean. She always knew votes counted. She knew she couldn’t get to the poll, so she wanted to make sure her vote got in.”

“It’s wonderful. I’m delighted,” Packard said in an interview after the event. “To think the regional park authority thinks I deserve this honor is really icing on the cake.”