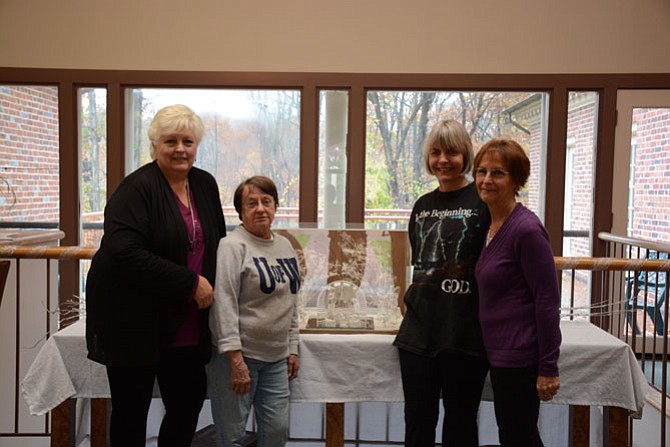 (From left) Vicki Albert of Mount Vernon, Faith Chudzik of Mason Neck, Rita Stankwitz of Clifton and Connie Myers of Springfield decorate the Pohick Church office in preparation for the Christmas Mart. Photo by Tim Peterson. 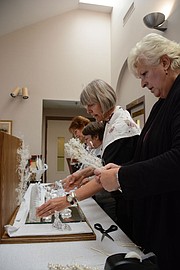 Each year, the Lorton resident manages a team of waitresses adorned in colonial garb as they feed three sittings of guests at the Episcopal Pohick Church Christmas Mart in Lorton.

“Most of us volunteers are old,” said Stribling, “but we can serve 100 people every hour: serve, set up, clean, pretty darn efficient.”

The local congregation of George Washington and George Mason, the historic Pohick church buildings host a Christmas mart every year on the Thursday before Thanksgiving. What began as a spontaneous holiday tea by the women of the church has grown steadily to include crafters from around Virginia and Maryland, and a fresh homemade meal that draws military on their lunch break from Fort Belvoir, county elected officials and community members.

Sixteen different crafters this year will showcase jewelry, knit and crocheted goods, stained glass and peanut brittle, in addition to the church’s own apple butter.

The menu stays the same, year after year. “Why reinvent the wheel? Everyone seems to like it,” said Springfield resident Connie Myers. Myers grew up in the church and has coordinated the mart and captained the kitchen in particular for the last two decades.

“I love coming here,” she said. “It's just been a part of my life, my daughters grew up here as well. Everyone here is just so warm and welcoming.”

The lunch takes place in the basement of the church office building, though the main church sanctuary will be open during the day. For the first time, members of the docent guild will be in the church, dressed in colonial clothing, interacting with visitors as “living history players.”

Women groups within the church use the mart as a major fundraiser for their community work. The Martha Guild and the Ann Mason Guild support community-building projects year-round.

“Outreach is basically the reason we do this,” said Myers. “We're very supportive of Lorton Community Action Center and New Hope Housing. Those are our biggies for both groups.” The guilds also work with Fort Belvoir’s Fisher House for wounded service members.

“George [Washington] went here, slept here too,” Myers said. “We want to let people know this is an active church.”

Stribling said the church members have also held a coat collection, gathered food for Thanksgiving baskets, hosted a Santa Claus breakfast and dinner for the homeless in the area.

“We really have a good time,” Stribling said. “That’s why we keep doing it. We enjoy each other’s company and the aspect of doing something good.”