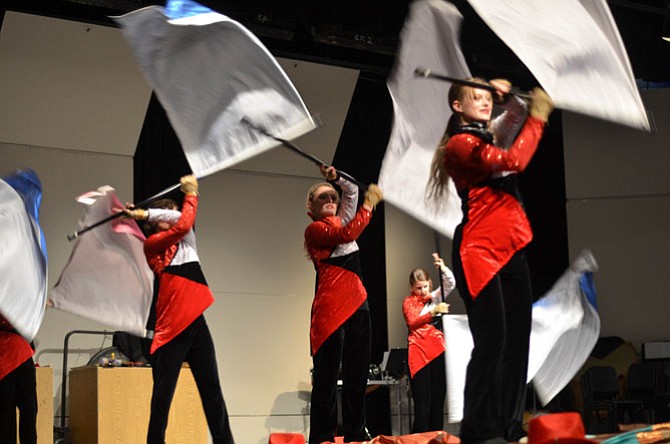 In addition to music from the Herndon High wind ensemble, the Nov. 12 evening concert also featured a show by the marching band and color guard. Photo by Ryan Dunn. 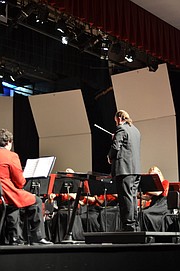 The concert featured selections from the wind ensemble’s upcoming Nov. 20 performance at the Virginia Music Educators Association conference as well as the Pride of Herndon Marching Band’s show titled “The Final Frontier.”

“I’m very excited about our upcoming performance at the Virginia Music Educators Association Conference in Norfolk,” said band director Kathleen Jacoby. “Only three high school bands are selected to perform each year. The Wind Ensemble members have been working since August to prepare an hour’s worth of newly published music. The students have run their own sectionals, come in on teacher workdays, and spent many extra hours polishing this program.”

The Virginia Music Educators Association (VMEA) is a nonprofit organization whose purpose is to provide helpfulness to its membership and promote advancement of music education through schools and educational institutions. VMEA is an affiliated state unit of the Music Educators National Conference: The National Association for Music Education. “Being in the VMEA show is a huge honor,” said Herndon senior Christine Horton. “There is a lot of pressure, but it is a great experience.” Horton plays the trumpet and is interested in studying music theory.

Herndon High Principal William Bates has also recognized the achievements by the Herndon High band. “I would like to congratulate our Pride of Herndon Wind Ensemble on being selected to represent Fairfax County Public Schools at the Virginia Music Educators Association (VMEA) 2014 In-Service Conference,” said Bates. “This superior group of student musicians consistently performs at an exceptional level and regularly earns a status of Honor Band. The Herndon community is proud to claim this group as our own and recognizes that Herndon will be represented well. I would also like to thank Mrs. Kathleen Jacoby, band director for her steadfast dedication to building and sustaining a superior band program. Her tireless efforts to support our students are greatly appreciated by all in the Herndon community.”

Herndon band students had a video conference with one of the composers, and a side by side rehearsal with the United States Air Force Band. Students and band leaders agree the process has improved both music making and teamwork skills. In addition to Kathleen Jacoby, the Nov. 12 concert had several guest conductors including Douglas Armstrong, Sharon Bonneau, Christopher Cunningham, and Steven Jacoby.

Herndon resident Sharon Bonneau is acquainted with many of the students in the school band, as she has been Director of Bands at Herndon Middle School since 2001. “Almost every one of them are former students of mine,” said Bonneau. In 2010, many of the current 10th grade band students went with Herndon MS band director Bonneau to the VMEA state music convention. “Usually this is a once in a lifetime opportunity,” said Bonneau. “I am really proud for all of them.”

Before the Herndon Marching Band’s performed the show “The Final Frontier” Herndon juniors Jacob Reeves and Aimee Toner had the opportunity to perform solo performances. Playing the flute, Aimee Toner performed Joseph Spaniola’s “The Three Graces.” Jacob Reeves displayed dexterity as he performed Joseph Green’s the ragtime “Xylophonia” with a xylophone, duck call and a siren whistle. Reeves looks forward to the VMEA concert. “I do not think I or our band director could be any more proud of the progress we have made,” said Reeves.