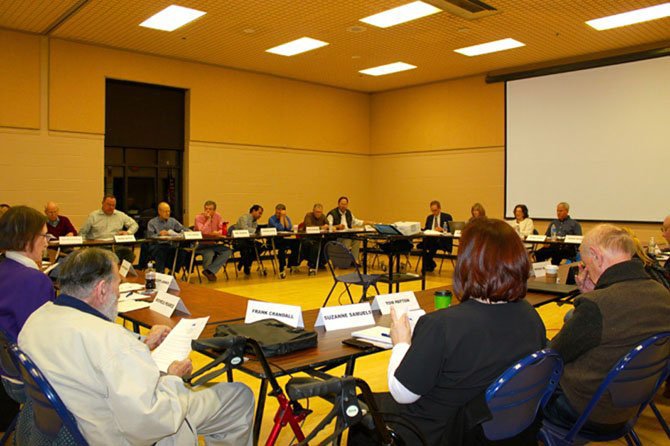 The MCA Board of Directors debated two rezoning resolutions at the Oct. 1 meeting. Photo by Reena Singh.

Like most McLean Citizen Association board members, President Sally Horn is concerned how new Tysons businesses will affect McLean.

Members debated two Tysons rezoning resolutions on their contribution to the urban center — stating their hope that the money would be kept in Tysons.

Much of the discussion — and amendments — came from an application from Tysons Westpark L.C. to use the former Westpark Hotel site at 8401 Westpark Drive for two residential buildings, a one-story accessory building and a 300 unit hotel. 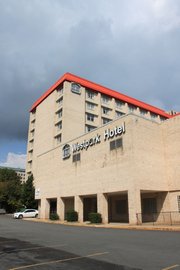 The vacant Westpark Hotel at the Route 7 and Westpark Drive intersection was debated at McLean Citizens Association’s meeting Oct. 1.

The company’s proffer — a required contribution to the community — was to create an athletic field off of Gallows Road if they entered into an agreement with another company or $2.2 million by June 30, 2015. Another proffer was to contribute $2.2 million for a new community library to be built by the site.

However, if the company chose to give the $2.2 million rather than use it for the field, board member Mark Zetts said the Board of Supervisors will make the decision on how to use the money.

Two of Horn’s three proposals on the resolution passed — to state that MCA does not object to the resolution rather than supports it and to urge that the county place the athletic fields in Tysons and not elsewhere.

“I want all 20 fields in Tysons, period,” said Zetts. “We can talk about fields elsewhere after the 20.”

He said there is a tremendous pressure to put recreation areas in Tysons Corner to give its new citizens a place to play sports close to their homes and new schools rather than come to McLean.

Although height flexibility is allowed if 20 percent of the units were contributed to workforce housing, many were worried it would set a precedence if the resolution passed.

“I am really disturbed that the height is violating the height restriction,” said board member Katherine Probst.

She said she would rather the MCA be told beforehand about any major zoning restrictions before the resolution was placed before the Board of Directors to vote on.

The resolution passed 21 to nine with three abstentions.

The proffer on the resolution included a monetary proffer for an athletic field equal to $1.81 per ground floor area by June 30, 2013 or $2.38 per square foot when the first occupancy permit is issued as well as a 10-year space for the Fairfax County Fire Marshal office in an adjacent building.

“This is a 10 year holiday for the fire marshal,” said Bill Denk. “If we’re going to have a bunch of proffered space, it’s eventually going to be an obligation for the county.”

The location is 1/2 a mile from two Metro stations, but a block away from a bus station.

The resolution passed unanimously with one abstention, but there was a motion to reopen the resolution to negotiate where the athletic field would be placed after the discussion with the Tysons Westpark L.C. resolution. The motion failed.

“Tysons is a very complicated issue,” Horn told the board members. “If you’re interested about learning about more, please go to [planning and zoning] meetings.”