All Aboard the Trolley
Votes

All Aboard the Trolley 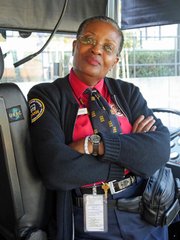 Marlene Stevens is set to begin her first Alexandria trolley trip of the day. The trolleys leave every 15 minutes from the Potomac River Waterfront and rune up King Street to the Metrostop.

It was a cool October morning. The trolley door opened with a swish. “Good morning, watch your step," Marlene Stevens, the bus operator for the Alexandria trolley was beginning her first trip of the day. The free trolley begins at the Potomac River waterfront and runs about a mile to the King Street Metrorail station with stops every 2-3 blocks.

"There was a rumor that we would stop anywhere along the way but that's not safe," she said. "See the round yellow sign like the sun — those are the official stops." The first passenger to step onto the trolley sits up in front on the polished wooden slat seats. She says that she lives in New York but comes every summer to visit her aunt. "I always take the trolley; there is just something fun about it."

The historical recording begins to play: "We are approaching Patrick Street, named after Patrick Henry, our illustrious patriot."

Stevens says she has just been doing this job since August but was a DASH bus driver before. "They train you and then decide when you are ready to let go. But," she says enthusiastically, "When this job came up, I claimed it for myself. It is perfect for me. I love history and every day I learn something new about Alexandria’s history. And I love being around people and it takes me back to my childhood. There is just something about trolleys." 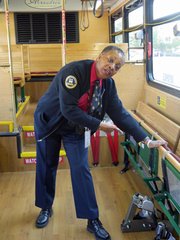 Marlene Stevens demonstrates the two spaces that can be converted for wheelchairs on the Alexandria trolley. A mechanized platform is also available for those who have trouble climbing the steps to the trolley. 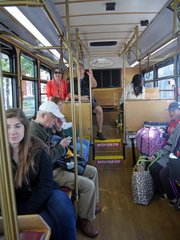 Passengers file into the trolley every 2-3 blocks to ride the full length to the Metro or to get off for lunch or to investigate the shops and historic sites in Old Town Alexandria.

As two customers loaded with bags struggle aboard, they explain they are traveling. Stevens says there are a lot of tourists but also a lot of locals who ride to work or to lunch. "See those outdoor tables. They will be full by lunch as people try to grab a few more days outside."

She says she knows the trolley is full when people are crowded up to the wide yellow line painted on the floor in back of her seat. A sign on the front side seat indicates "use la grada para sentarse" (step up to the seats.). There is a mechanical ramp at the front door activated by a push button on the dash that helps people who have trouble with steps. The trolley can also convert seats to accommodate two wheelchairs if necessary. Stevens says that most people are very polite and follow the rules. They move over to make more room and give up a seat to a woman. "But one day when it was sweltering this summer a woman demanded that I put people off the trolley so she could get on with her stroller, child and husband. She was very irate. But that is rare."

A bell rings out as a passenger pulls a cord to signal he wants to get off at the next stop. As people hop off, Stevens reminds them, "Make sure you have all of your belongings. Watch your step. Have a great day." She adds, "even though I remind them, people leave a lot of things." She says they have two bike racks on the front of the trolley, and one day a man got off and left his bike on the front. "He returned later that evening to retrieve it."

She arrives at the end of King Street and the trolley empties as her passengers head to the Metro. She sits for 15 minutes while another trolley takes passengers back. Stevens starts up what she calls "her 2,000 pounds of red steel with a bell. Come on baby girl, there you go." She opens the door as a large line of waiting passengers steps onto the bus. A straggler runs across the sidewalk to catch the trolley before the door shuts. Stevens always waits for passengers to sit down before taking off. As Stevens rounds the curve at the end of the line and makes her final stop, 5-6 passengers head for the Christmas shop. "This is my favorite place with the original cobblestone around the corner. They told me if I want to keep my job, don't drive over the cobblestone … and I never do; it's a part of history."

Stevens drives the trolley Sunday-Wednesday from 10 a.m. -3 p.m. and a bus route on Thursday. She said she had been a nurse's aide, a death notice writer for the Washington Post, an actress, a DOT contractor — whatever job there was. She finally said to herself, "Lady, what do you want to do — you're getting old." And she had always wanted to drive a bus. "Sometimes life just gets in the way."