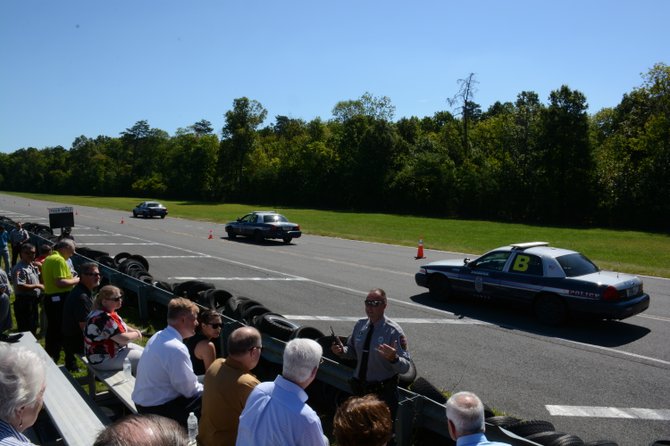 The speed limit sign in your neighborhood may be smarter than you think. To kick off Supervisor John C Cook’s anti-speeding campaign on Thursday, Aug. 28, Fairfax County police officers flexed the muscles of eight new radar signs they’ve purchased for the county.

“With school starting, it’s a good time to be focused on safety,” said Cook on the timeliness of the kickoff. His campaign is intended as an education-based initiative to encourage drivers to slow down in their communities. The campaign’s motto is “Slow Down: You live here. We live here.”

The new signs will not only flash the driver’s speed back to them, but record whether that caused them to change their speed or not. That data, along with the date, time and location of each recording will be transmitted back to the police for analysis.

Officers at the Emergency Vehicle Operation Center at the FCPD Sully District Station demoed the new signs while showing the effects of speed on stopping distance.

“People might say, ‘Oh, I was only going ten over,’” said Master Police Officer Joe Moore. “Well, ten over might be the difference between hitting an object, hitting a kid, another vehicle, and not.”

“Most of these issues are bad habits by all of us,” said Fairfax County Police Chief Edwin C. Roessler Jr., “and we need to change our habits and improve our culture of safety.”

“It's not just about writing the ticket,” Roessler continued. “It's making all of us safe so we can get home at the end of the day.”

More information on the initiative can be found online at fairfaxcounty.gov/slowdown.