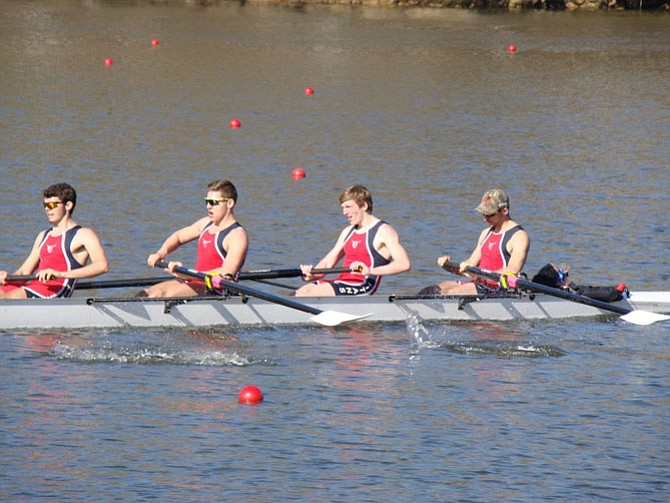 The T.C. Williams boys’ and girls’ crew teams reunited in Occoquan on April 18 to take on tough competitors in the Smokey Jacobs Regatta.

Titan rowers were victorious in six races and were runners-up in four others. Leading the way for T.C. crew were the six victorious boats:

In an exhilarating race, the boys’ first 4 boat powered down the 1,500-meter race course with a time of 5:27.7, edging out West Springfield by less than a second. The Titan boys also won the qualifying heats with a time of 5:27.3. Members of the boat include Angelo Leitner-Wise, Tyler Souza, Carter Weitekamp, Sam Schneider, and Anthony Ponichtera (coxswain). The boys’ first 4 is guided by Coach Pete Hearding.

The Titan men’s lightweight 8 also crossed the finish line first in its race, putting in a time of 5:04.6, although it was racing in an exhibition status. Members of this boat include: Addison Guynn, Preston Tracy, Peter Laboy, Stefanos Psaltis-Ivanis, Alexander Psaltis-Ivanis, Asher Elkins, Callum Jaffe, Sarin Suvanasai and cox Brianna Zuckerman. The lightweights eagerly anticipate racing in full capacity at the Charlie Butt regatta next week.

The Titans now enter the most challenging part of their schedule. First up is the Charlie Butt Regatta, which will be held this Saturday along the Georgetown waterfront and will feature some of the top crews in the Washington, DC metro area. The following two weekends will be the Virginia State Rowing Championship at Occoquan, followed by the Stotesbury Cup Regatta in Philadelphia, the Scholastic Rowing Association National Championship Regatta in Cherry Hill, N.J., and the Canadian Scholastic Championship Regatta in St. Catharine’s, Ontario on June 5-7, which will be the last race of the 2015 rowing season.