Development is underway along Route 1. 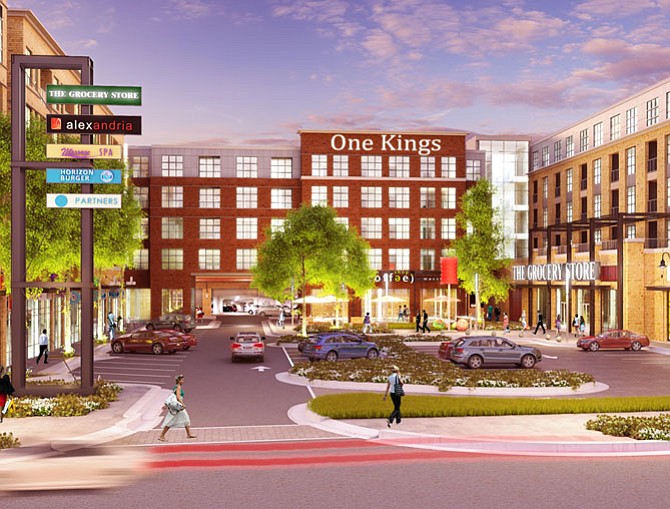 The development in the former Penn Daw Plaza shopping center is set to include 400 apartments and 41 townhomes. Image courtesy of the Southeast Fairfax Development Corporation

The former Penn Daw Plaza shopping center was rezoned as part of a 2012 Comprehensive Plan amendment for the Penn Daw area and is set to be replaced by a mixed-use development called One Kings. One Kings will feature 400 apartments, 41 townhomes and ground-level retail. The Shelby, a luxury apartment community at 6200 N Kings Highway, has already been built out by Insight Properties.

In March members of the Fairfax County Redevelopment and Housing authority voted in favor of moving forward with interim agreement to develop the remaining 33 acres of North Hill. (Fifteen out of a 1981 land purchase have been developed as Woodley Hills Estates.) The Community Housing Partners of Virginia and Philadelphia-based developer Pennrose partnership has proposed building 329 multi-family apartments in two separate buildings, 144 townhomes and leaving some space for a park. A number of the units would be designated households with lower incomes.

The Hersha Group has finished with demolition of the Fairview Motel and obtained construction permits to move forward with a new 108-room development renamed Fairfield Inn & Suites.

Gold’s Gym is still working on a $2 million expansion in its U.S. Rt. 1 location.

Once the site of Habitat for Humanity’s ReStore, Gold’s is undergoing a $2 million expansion while continuing to operate. No overall completion date has been released, however work is finished on a new saltwater pool.

The $180 million project to widen Route 1 from four to six lanes, while also accommodating mass transit, bicycles and walking, is expected to be completed in 2016.

The Parker residential development is going up adjacent to the Huntington Metro station.

The Parker at Huntington Station

The decades-old VSE office building situated by the Huntington Metro was torn down and is set to be replaced a 390-unit, four-to-six-story residential development, as well as a 15-story, 260,000 square foot office-retail building and a 150-room hotel. Rezoning and a site plan were approved in 2012, and apartments and a parking garage are currently under construction.

The long-awaited grocery experiencing destination is scheduled to open June 14 at 7 a.m. The 126,000-square-foot store includes a full-service “Pub” bar-restaurant. Though Wegmans isn’t known for grand opening celebrations, there will be a kickoff event in September to mark the opening of the entire shopping center.