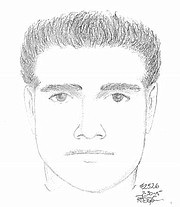 The Arlington County Police Department’s Special Victims Unit is asking for the public’s assistance in identifying and locating a suspect involved in the attempted rape and abduction of a female victim which occurred in the early morning hours of July 25.

The subject is described as a white Hispanic male approximately 5’6” – 5’8” tall, weighing 150-175 pounds with an athletic build. The subject was last seen wearing a white t-shirt and jeans. The victim, working with Fairfax County Police Department sketch artist, was able to provide details for the a composite sketch.