Getting in shape while raising money for charity. 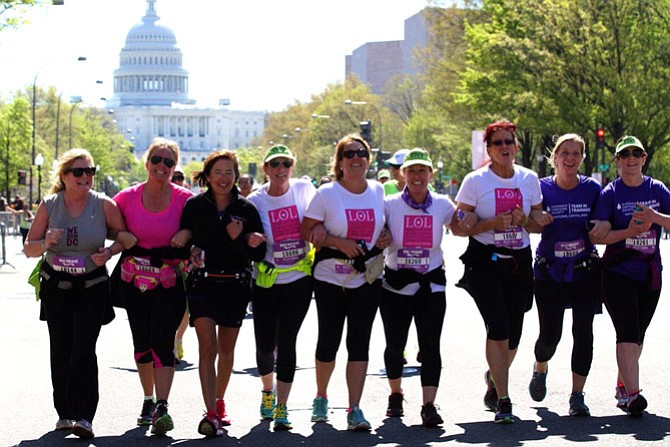 Rain poured from a gray March sky. Drenched racers wound their way through Washington, D.C. before spilling across the finish line at R.F.K. Stadium, their running shoes heavy and soaking wet.

“We were freezing cold and shivering the entire time,” said Ann Goettman of McLean. “We looked like we’d been through a car wash.”

Goettman and others on her team of would not let the elements deter them from completing the 2015 D.C. Rock’n’Roll Half Marathon. They’d spent the last four months running, walking and lifting weights as part of a

Team in Training (TNT) fundraising effort to support the Alexandria, Virginia-based Leukemia & Lymphoma Society (LLS). Participants pledged to raise money for a charity in which they believe by training for and competing in marathons, triathlons, cycling and hiking. In turn, they get access professional fitness coaches who guide them as they set fitness goals, boost their endurance, lose weight, and get toned taut.

“You have an opportunity to give back from a philanthropic perspective, but you’re also putting yourself out there to get in the best shape,” said Jaclyn Toll, Deputy Executive Director of the Leukemia & Lymphoma Society.

“It brings you together with other like-minded individuals, people who are into the combination of philanthropy and health and wellness.”

A central figure on Goettman’s team is Lynne O’Brien. In fact, the group came together in O’Brien’s honor after she was diagnosed with leukemia three years ago. Daunted by the challenge, but motivated by the prospect of hope, she ran her first half marathon in 2013.

“A huge benefit is that we were all getting in shape and were uniting around a cause,” said O’Brien. “I lost weight and it was great for my stamina and overall health. I’m 53 and it’s great to know that I can run a half marathon.”

The coaching staff, says O’Brien, has an effective program that whips racers into shape before each event. Lessons range from using proper form during a workout, stretching to prevent injury and hydration and nutrition to sustain the level energy necessary to complete race.

“They break it down into small parts, and on one day we’ll fast run for shorter distance and the next day,” she said. “They get pretty specific. They’re telling you how to move your arms and hold your head and even how you should step.”

The metamorphoses are often beyond the physical. “In terms of their outlook on exercise and their new found love of long distance exercise and endurance, the transformation unbelievable transformation,” said Skye Donovan, Ph.D., department chair and associate professor of Physical Therapy at Marymount University in Arlington volunteers as coach for TNT.

One of the factors in the evolution of the mindset of the team members is camaraderie and the knowledge of a higher cause.

“New drugs are coming down the line,” O’Brien said. “Doctors say it’s an exciting time for them. Since I was diagnosed three years ago, five new drugs have come into the market.”

Many train for and endure physical feats that seemed unattainable at first thought. “I am not an athlete, I’m a busy, 53-year-old mom of five kids. I’m busy,” said Beth O’Shea of McLean. “But the next thing you know I’m getting myself in shape, meeting new people and going on long walks.”