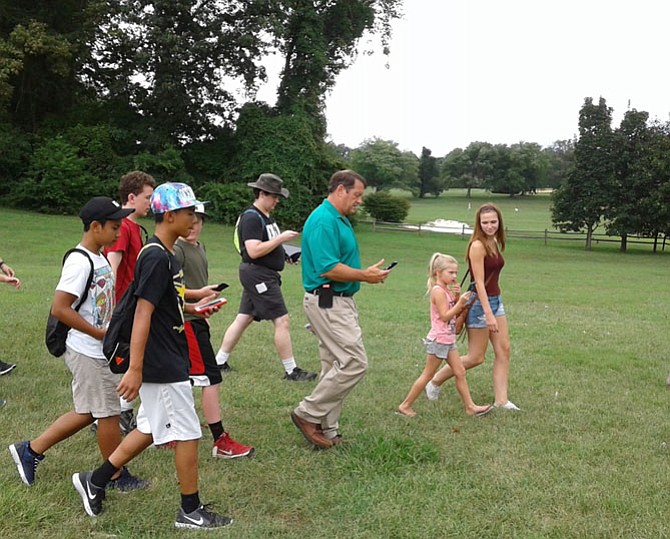 Trump and Clinton aren’t the only characters to watch during an election year full of surprises. Since its July 5 launch, “Pokémon GO” has swept the nation at a feverish pace, capturing the public eye and providing voters with a fun alternative to watching speeches and popularity polls.

Local government officials urge players of this ridiculously popular smartphone game to pay attention to their surroundings while trying to catch nearly 150 animated pocket monsters called “Pokémon” and collect experience points for their Pokédex, which tracks their levels of achievement.

Fairfax County Supervisor Pat Herrity [R-Springfield] and Capt. Gervais T. Reed — commander of the Fairfax County Police Department West Springfield District Station — do not want their jurisdiction to be party to freak accidents that have occurred elsewhere in the country by distracted gamers with little or no situational awareness beyond their smartphones.

Inova crisis communications officer Tracy J. Connell, reports no recent injuries from local “Pokémon GO” accidents have been treated at the Fairfax Hospital emergency room. In an effort to maintain the status quo, both Herrity and Gervais held a “Pokémon in the Park” fair last week at Burke Lake Park to promote safe gaming habits.

FOR FIVE HOURS on a hot summer day, Herrity led several PokéQuests for groups of 25 or more game enthusiasts with his legislative aide Zach McCoy — who dressed for the occasion as the beloved Pokémon mouse called “Pikachu.”

As participants focused on their smartphones and tablets, collecting grass and water-type Pokémon during their 15-minute power walks around the park habitat, they were protected by police escort.

“Nobody believes I got Snoopy” quipped Lt. Eli Cory. The only park visitor who didn’t get the police officer’s joke was an unsuspecting reporter who declared the “Peanuts” cartoon dog is not a Pokémon creature!

Cory says he looks forward to seeing future imitation games and can imagine people walking around the park with their smartphones held high playing an augmented reality version of the “Angry Birds” animated video game.

“We want everyone to be safe and be aware of their surroundings when they play Pokémon,” Herrity said Aug. 5.

“Today, we’re all about fun and safety,” he adds, “and ice cream and train rides.” Herrity and his staff distributed bottled water, ice cream and tickets to the park’s carousel and “Pikachu-choo” miniature train that allowed passengers to play “Pokémon GO” as it circled the lake.

Each trek through the park began with a brief talk by West Springfield Master Police Officer Mike Stewart, who distributed useful crime prevention tips and warned gamers about some of the hazards of “Pokémon GO” — such as walking into other people and trespassing.

According to an FCPD report, two men and three teenage boys were found playing the game late at night July 13 inside Keene Mill Elementary School in Springfield. All were charged with trespassing on school property.

Despite pitfalls experienced by some accident-prone gamers throughout America, “Pokémon GO” fans agree this smartphone app offers users a fresh alternative to sitting in front of the computer or television.

“I walk through my neighborhood now and I see parents with their kids where I normally wouldn’t,” Herrity observes.

“Then here comes Pokémon,” Herrity exclaims, surrounded by more than 300 happy children and their parents on a Friday afternoon. He believes the game provides good exercise for the whole family.

HIS EVENT at Burke Lake Park was inspired by his colleague, Supervisor Kathy L. Smith, [D-Sully] who held the first Pokéthon in the County July 20 in Chantilly to promote safe gaming practices.

“It was so successful, we wanted to replicate it in the Springfield District,” said Herrity’s communications director Erika Dyer — who outranks her boss at Level 16. Herrity said he reached Level 4 after leading his first PokéQuest of the day and worked hard the next four hours to catch up with his legislative sidekick.