Wheelchair accessible bathroom doesn’t have to be utilitarian. 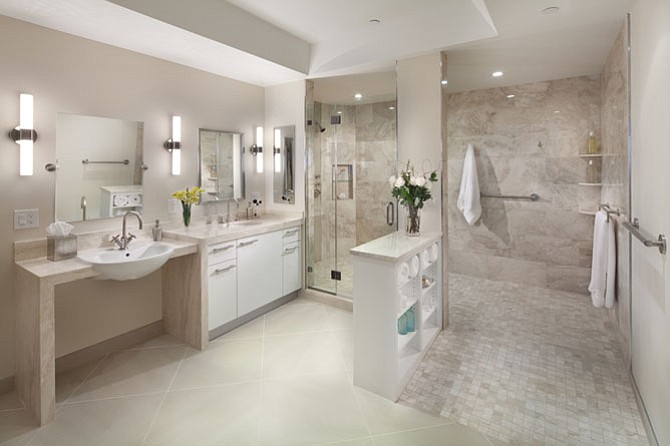 Judith and Curtis Brand chose honed marble in neutral tones for their bathroom, which was designed by Glickman Design Build. Photo by John Troha

After Curtis Brand was diagnosed with amyotrophic laterals sclerosis (ALS) and he could no longer climb stairs, he and his wife, Judith, had to make the difficult decision to sell their home in northwest Washington, D.C. They then purchased a two-bedroom, two-bathroom property on the 18th floor of Turnberry Tower in Arlington. 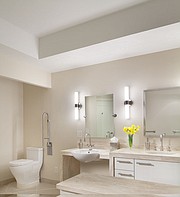 Interior designer Lanna Ali-Hassan created a bathroom that is wheelchair accessible, but maintains a spa-like elegance. The space received a 2015 Chrysalis Award.

With amenities such as floor-to-ceiling glass windows, a European gourmet kitchen and marble bathrooms, the property offered the Brands luxury and could easily accommodate Curtis. It did need one modification, however: “There was a beautiful marble bathroom that I couldn’t use,” said Curtis. “We had to remodel it and replace fixtures that I could use.”

After they purchased the property, the couple went on vacation to Florida. They left the project in the hands of Lanna Ali-Hassan, an interior designer with Glickman Design Build in Potomac, Md. “We cast our fate to the wind,” said Judith. “We made the decision and put it in their hands.”

The design team’s task was to create an aesthetically appealing, accessible space and have it finished when the Brands returned. While they were able to relocate some of the existing features, including the medicine cabinet, base cabinets and sink, the space needed a major overhaul to achieve a design that is both elegant and accessible.

“We actually had to gut the entire bathroom,” said Ali-Hassan. “We replaced polished marble with honed marble to eliminate the slip factor. There are his-and-her side sinks that are completely different, but mesh together.

The crew also removed the existing bathtub and replaced it with a roll-in shower to accommodate Curtis Brand’s wheelchair. There is also a traditional shower entrance. In addition, the glass-enclosed shower includes a seat, marble flooring and walls, and a Schluter water membrane system.

Through an exchange of emails and texts, the Brands worked with the design team to choose materials and fixtures. “We chose them from pictures,” said Judith. “She gave us a number of alternatives to look at.”

The toilet was replaced with one that is Americans with Disabilities Act (ADA) compliant, and Ali-Hassan added as many grab bars as possible, making sure “to use fixtures that are dual functional like towel bars that are also grab bars. Even the toilet paper holder is a grab bar.”

Other features include a waterfall countertop, giving the appearance of a continuous surface that blends from the top surface down the side, and a built-in cabinet and shelves. The team chose materials that fit into the condominium’s existing design aesthetic.

The result is a bathroom that maintains the level of luxury and accessibility that the Brands desired. The space is safe, but still maintains a spa-like elegance of the original bathroom.

“We created a very functional bathroom for me as well as for my wife,” said Curtis.

The bathroom was awarded the 2015 Chrysalis Award, which recognizes excellence in the remodeling industry.