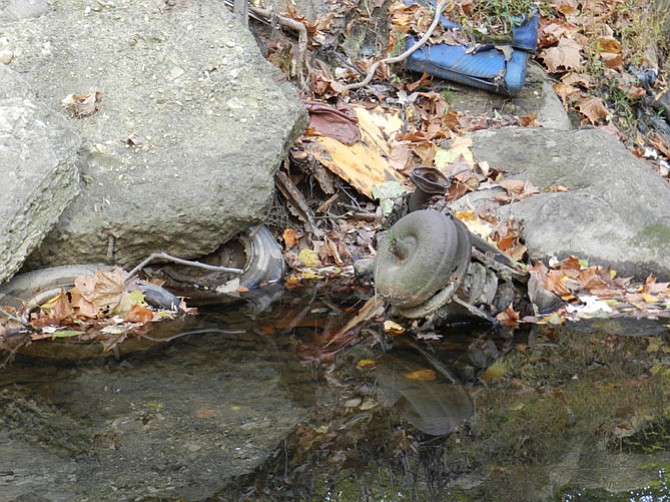 Up to now, Fairfax County claims 4,000 tires have been removed from the Giles Run Creek.

Bill Niedringhaus was just scouting new hiking trails along Giles Run creek in the Lorton area. But in his November 2014 exercise, he discovered thousands of used tires and other discarded automotive parts in the area. Not only was it not suited for trails, he saw it as an environmental hazard.

Though part of the land where tires and other trash were located is privately owned by AAAACO Auto Parts, Chudzik believes much of the debris further down in public areas of the creek originated from that property.

Chudzik’s complaint was referred to the Fire Marshal’s office, which deals with hazardous materials such as old tires, in November 2014. Officials from that office investigated the situation, which resulted in the owner of the property removing many of the tires within the scope of the business’ land.

It’s unknown when all the tires and other automotive parts were dumped on and beyond the company’s property, though some of the materials appear to have been embedded in the earth for longer than the owners have been there, according to reports from the Fire Marshal investigation.

IN A LETTER to Chudzik, Board of Supervisors chairman Sharon Bulova gave the status update that under the Fire Marshal’s supervision, 4,000 tires have been removed from the site since Chuzik first filed his complaint.

“The property owner has voluntarily complied and has continued to take steps to address the issue,” Bulova writes. “The Fire Marshal requested [Virginia Department of Environmental Quality’s] assistance regarding the remaining tires. We have given the [Department of Environmental Quality] the Fire Marshal’s investigation report and they will continue to investigate this issue.

“We’re a long way from feeling satisfied that we’ve made any progress,” Firth said. In June, the Federation passed a resolution to be presented to the Board of Supervisors that calls on Fairfax County to take action if more of the debris isn’t cleaned up in the next several months.

Del. Dave Albo (R-42), after being contacted by Chudzik, sent his own letter to Angie Jenkins, Policy Division director at the Department of Environmental Quality. He writes, “I urge you, in an effort to reduce the pollution of our watershed, to enforce this resolution and to ensure that the waste be removed from the creek.”

The Federation has been working with the Fire Marshal’s office over the last three months to follow through with its resolution.

“They’ve just got to make progress until it’s done,” said Firth. “We’re following up monthly, basically, with the Fire Marshal, until we feel satisfied with the result. They’ve been very helpful. You can’t knock the county. It’s frustrating, but you’ve got to be kind of reasonable as well.”

Firth believes October 2015 is a feasible deadline expectation for the remaining debris to be removed.

AFTER HEARING that authority over further action on the site rested with the Virginia Department of Environmental Quality, Chudzik set up an interview with two men from that organization.

In the meeting, Chudzik said, the men confirmed there was no formal, written agreement between their department and the property owner to clean up the site, only a verbal accord that it would be completed on a voluntary basis. The department was also not planning to pursue any formal action against the property owner.

“I asked why [the Department of Environmental Quality] did not apply its enforcement authority in this case to require the property owner to clean-up the trash and debris from Giles Run Creek by a date certain,” Chudzik said in an email. “In reply, I was told that [the Department of Environmental Quality] is currently understaffed and overextended, limiting [its] responsiveness regarding this case.”

Richard Doucette, with whom Chudzik met from the Department of Environmental Quality, did not respond to a request for an interview.

Centreville resident Philip Latasa of the Friends of Accotink Creek organization has helped with volunteer clean-up efforts in the public areas of the Giles Run creek. The Friends group has also helped write letters to various county officials.

Latasa said dumping is unfortunately not unique to this site. “People are just too lazy to go to the official landfill sites,” he said. “They think they’re saving just a few dollars, and that’s worth spoiling the environment.”

There’s automotive-chemical dumping, as well as a lot of organic yard waste being dumped in the woods, Latasa said. “They think it’s just a bunch of sticks out in the woods, but it’s just about as unethical as dumping tires and auto parts,” he said.