Mount Vernon: ‘If You Believe’
Votes

Mount Vernon: ‘If You Believe’ 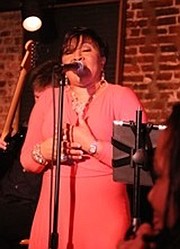 Alfred Street Baptist Church choir soloist Negleatha Johnson, shown performing at Blues Alley, will present a benefit concert Aug. 16 at the Waterford in Springfield. Johnson, whose sister was diagnosed with a rare and aggressive cancer, is raising funds for the Sarcoma Alliance. Tickets are available at www.negleathajohnson.com.

“One of my older sisters was diagnosed just this past February with leiomyosarcoma, a rare and aggressive cancer that has changed us all,” said Johnson, a soloist with the Alfred Street Baptist Church choir. “After her fourth or fifth chemotherapy treatment, it was determined that the chemo had been of no effect and the cancer had spread. I knew then that I wanted to allow this concert to shed light on and to help raise support for sarcoma cancers.”

Known as “DrJ” for using music as medicine, Johnson uses her voice to spread the message of hope, healing and restoration — the three areas of focus for her work with Life Waters Ministries, the ministry she and her husband co-founded 20 years ago.

“My life in full-time ministry has allowed me to see the heart of many people,” Johnson said. “Week after week, I hear about the difficult challenges that so many are going through. The music that I sing is meant to bring hope to the listener and the songs that I've chosen for the Aug. 16 concert are from Broadway musicals that will shed hope on life's challenges. Songs like ‘The Impossible Dream’ from Man of La Mancha — no one listens to that song and leaves with feelings of defeat.”

With a theme of “If You Believe,” the concert will be held at The Waterford in Springfield and will feature a buffet dinner in addition to the concert. All proceeds will benefit the Sarcoma Alliance.

Joining Johnson on stage will be jazz vocalist Janine Gilbert-Carter, who was a featured performer at the 2014 Mid-Atlantic Jazz Festival.

“I love the calming, yet assured nature of Janine’s voice and thought that it would be so very nice to have her join me in sharing some inspirational songs from Broadway musicals,” Johnson said. “We're doing fresh arrangements of many of the songs which will convey just how gospel and jazz meet on Broadway.”

Marshall Keys, who has played with such notables as Stevie Wonder, will join the duo on saxophone, with Gerry Gillespie on keys, Ross Smith on bass, Greg Carter on Drums, Kenny Kohlhass on guiter and Romera Wyatt on percussion.

The concert will feature songs from “The Wiz,” “West Side Story,” “Porgy and Bess,” “Fiddler on the Roof” and others. Doors open at 5 p.m. at The Waterford, 6715 Commerce St., Springfield. Tickets are $60 per person and include the buffet dinner and concert. For more information or to purchase tickets, visit www.negleathajohnson.com.