VDOT officials say I-495 Express Lanes will be just that. 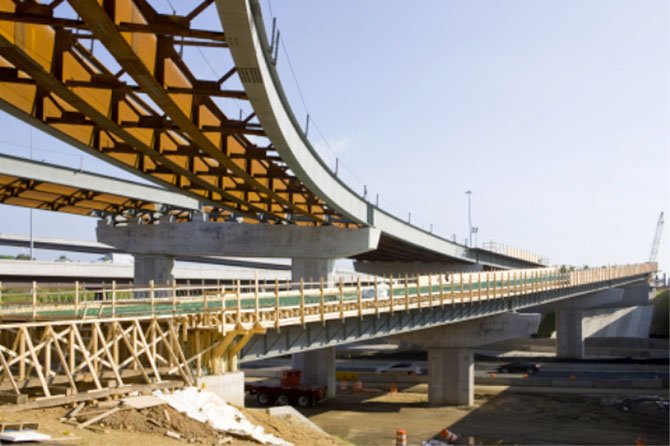 New bridge piers are under development to support completion of project construction in the Springfield Interchange and provide a seamless connection between HOV service on I-95/I-395 to the 495 Express Lanes. Photo by VDOT

Predictable, safe and reliable is not how most motorists would describe driving on the obstacle course known as the Capital Beltway.

But at a news conference last week, VDOT officials said that’s exactly what’s in store for drivers in the coming year as several billion dollars’ worth of Northern Virginia transportation megaprojects moves forward.

"The mild winter and early spring helped put us on schedule for our projects," said Steven Titunik, VDOT’s communications director.

Construction of the 14-mile HOT lanes, now formally called the 495 Express Lanes, is 90 percent complete, and the two new lanes - in each direction from Springfield to just past the Dulles Toll Road - are on track to open in December 2012, said Tim Steinhilber, Transurban-Fluor’s Express Lanes manager.

"The great news is that construction is ending. Drivers will have faster, more reliable and more predictable trips on the Capital beltway," Steinhilber said.

The 495 Express Lanes will provide much-needed relief to heavily congested Northern Virginia, according to VDOT officials. In a Transportation Institute 2011 Urban Mobility Report, the Washington, D.C. area had the worst traffic congestion in the United States, and yearly commutes that are twice as long as the national average.

"The 495 Express Lanes are the first roadway of their kind in the region," said Gregory A. Whirley Sr., VDOT Commissioner. "As with anything new, there is a learning curve and we want to make sure drivers and the community are educated and equipped to use the lanes." 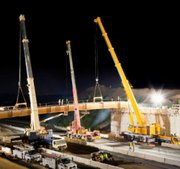 Crews observe large steel beams placed over I-495 to support the future Express Lanes Connection at Jones Branch Drive in Tysons Corner. All lanes of the Beltway were closed to accommodate the massive lift.

Instead of toll booths that create cattle-chute conditions, tolls on the new lanes will be collected solely with E-Z Pass transponders read by overhead monitors allowing motorists to pass through at highway speeds while deducting the toll from their E-Z Pass accounts. Single occupancy or two-passenger vehicles will pay the tolls. VDOT officials said the tolls will have "dynamic pricing," because there is no theoretical ceiling for tolls.

Toll prices are based on demand, and officials said it’s difficult to predict exactly what the tolls will be at any given time.

"We expect they will range from as low as 20 cents per mile during less busy times, to approximately a $1.25 per mile in some sections during rush hour. An average trip cost is estimated to be between $5 and $6," Steinhilber said.

Buses and vehicles with three or more passengers can use the Express Lanes for free by using a new E-Z Pass Flex, which gives drivers the option of a flipping a switch to avoid the tolls on the Express Lanes.

"It’s all about choices," said John Lynch, the Virginia Department of Transportation Regional Program Director. "By giving motorists more choices on the Beltway, the transportation picture in Northern Virginia gets another dimension that was not available before."

The project also includes the replacement of more than $260 million of aging infrastructure including 58 bridges and overpasses.

Steinhilber noted that construction of a new median and safety shoulder, which will divide I-495 north and south-bound traffic, will enhance safety and cut-down on gridlock in the event of accidents.

"The new median will provide an enforcement and staging area for Virginia State Police and dedicated incident management crews. The key is to keep traffic free-flowing," he said.

"The 495 Express Lanes will fundamentally change how the region thinks about and uses the Capital Beltway in Virginia," said Steinhilber. "Between the new exits and on-ramps, the new travel options and the significant increase in capacity, the Beltway will be wholly different than just a few years ago."

THE EXPRESS LANES PROJECT is a partnership between VDOT, the Virginia Department of Rail and Public Transportation, and Transurban-Fluor, two private companies in a joint venture to build and operate the new lanes.

VDOT officials said motorists can expect to encounter the following in the coming months:

*Extensive milling and paving along the entire Express Lanes corridor, which means 400,000 tons of asphalt placed in 2012.

*Construction of new ramps and bridges in the middle of I-495, providing direct access between the Express Lanes and 10 major access points.

*Installation of lane separators every eight feet throughout the corridor to segregate the Express Lanes from the regular Beltway lanes.

In addition to the Express Lanes project, other megaprojects include the Dulles Corridor Metrorail; the Telegraph Road interchange in Alexandria; the Fairfax County Parkway extension; and the proposed I-95 HOV/HOT lanes. Together, these projects represent several billion dollars’ worth of local transportation improvements.

For more information on construction, visit www.vamegaprojects.com. Go to www.495ExpressLanes.com for information on tolling and the Express Lanes system will work.