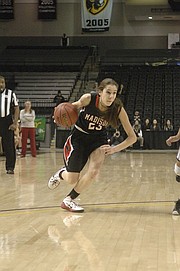 During her high school career, Kelly Koshuta was 6 feet, 2 inches of low-post dominance.

As a senior, she averaged a double-double and earned first-team all-state honors while leading the Madison girls’ basketball team to the Conference 6 championship, a region runner-up finish and a trip to the state tournament. She finished with 33 points and 19 rebounds during a region semifinal victory over Chantilly, at one point scoring 19 straight points for the Warhawks. She totaled 32 points and 11 rebounds in an overtime loss to Cosby in the state semifinals.

Koshuta graduated in 2015 and is now a freshman on the Virginia Tech women’s basketball team. How do the Warhawks deal with the loss of their go-to scorer?

“I think we’re still trying to figure that one out,” head coach Kirsten Stone said.

While Madison no longer has Koshuta, the Warhawks do have a group of talented and experienced guards that can excel in a more up-tempo style of play. Seniors Aidan McWeeney and Alexis Hermes, and junior Morgan Simpson were key contributors last season and figure to have Madison once again competing for the conference championship.

“We’re going to run more of a guard offense and five-out and try to put some pressure on some people,” Stone said. “... Losing Kelly is losing 20 points per game and 12 rebounds and how do you make up for that? But losing Kelly [also means] we can run and gun and press a little bit.”

McWeeney enters her fourth varsity season. Stone referred to McWeeney as “my stability.”

“Aidan's a great leader and player,” teammate Hermes wrote in an email. “It's been a pleasure playing alongside her these past four years and I hope to make the most of this last one.”

Hermes led the Warhawks with 13 points in their region final loss to Oakton last season, and scored 10 points in the state semifinals.

“Alexis and I have been playing basketball together through Vienna since fifth grade,” McWeeney wrote in an email. “She is a great teammate and a good friend. Her quickness and strong ability to attack and finish at the basket make her a very dynamic player and very important to our team.”

Simpson transferred from Bishop O’Connell to Madison last season and enters her second season with the Warhawks.

“Morgan will lead on the court, Aidan tends to lead off the court,” Stone said. “Alexis is a lead-by-example [player]. I think they all have their role on the team.”

“We're all quick and have versatile skills on offense,” Hermes wrote. “Nearly all of us are able to guard different types of players on defense. People will probably be doubtful of us this season since we lost our leading scorer, so we'll need to work harder than ever to show them we're just as capable this year.”