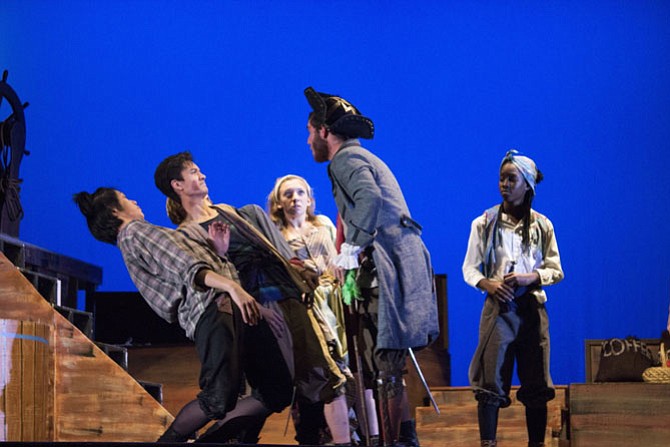 It's the 1700s, pirates are sailing the high seas, and there's treasure to be found! With lively main actors, an energetic ensemble, and carefully choreographed scenes Oakton High School's "Treasure Island" captures the swashbuckling adventures of the time.

Premiering in the Tony award winning Alley Theatre in 2007, Ken Ludwig's play adaptation of Robert Louis Stevenson's book “Treasure Island” follows the story of a young Jim Hawkins (Madison Carter) and his journey for buried treasure. The drunk and paranoid pirate Black Dog (Max Torti) stumbles into Jim's family tavern, and after dying from a heart attack leaves Jim with a map leading to buried treasure. Jim with the help of a wealthy but eccentric Squire Trelawney (Madeline Doane) and the intelligent Dr. Livesy (Sam Harmic) embarks on a voyage to Treasure Island. On the way to Treasure Island the charismatic and calculating Long John Silver (Michael Williamson), a pirate who has joined the crew as a cook, leads a mutiny leaving Jim and his allies on the island. With a little quick thinking and the help of the marooned sailor Ben Gunn (Tim Cerva) Jim is able to outwit the pirates and come home with treasure and the story of a lifetime.

The main actors in the play grabbed your attention the moment they stepped on stage. Especially notable was Williamson. His well crafted pirate voice rang throughout the theatre adding to his already strong stage presence. Williamson's peg leg walk, and excellent facial expressions made the play very believable. Doane wonderfully alleviated the darker parts of the play with great comedic timing and mannerisms that continued to contribute to her scenes’ hilarity.

The energy and engagement of the pirate ensemble made every scene vibrant and exciting. One stand out in the ensemble was Erick McIntosh playing Israel Hands, a rough and tumble pirate mutineer. McIntosh always brought great physicality to every scene he was in and made the fight scenes fantastic to watch. Torti, while only in the first act, was the highlight of the scenes he was in. Torti made use of every second he was on stage, using masterful mannerisms and facial expressions to really capture the paranoia of the pirate Black Dog.

The real treat of the evening was the fight scenes, choreographed by Craig Lawrence. They spanned the entire stage and incorporated blood for wounds, and characters handsomely handled their weapons. This along with the great choreography of the fight, made for a visually impressive scene.

In order to capture the adventure of life on the seas, this show needs lots of physicality and energy. Oakton High school did all of this and more, putting on a wonderful production of "Treasure Island."