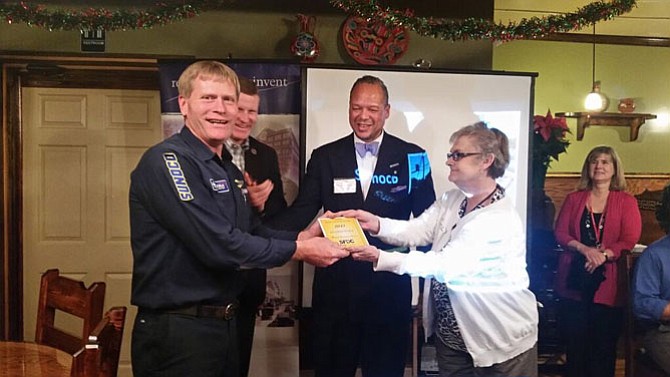 The landscaped grounds of Steve Mayer and his brother’s Sunoco gas station at 8300 Richmond Highway won first place in the 2014 Mary Thonen Highway Beautification Awards, however in 2015 the station finished second.

“Curb appeal is very important,” said Edythe Frankel Kelleher, executive director of the Southeast Fairfax Development Corporation. “It leads to a better atmosphere for the community businesses, for people who want to live in the area and for people to be attracted to go shop. It’s extremely important.”

Curb appeal was a priority for Mary Thonen, a former board member with SFDC, and for whom the beautification award is named.

This year, the luxury apartment building Beacon at Groveton won top honors for its neatly trimmed and colorful landscaping around the building. Steve Mayer’s Sunoco station, a repeat honoree, came in second, followed by Jiffy Lube. There were nine honorable mentions.

The open house was held Dec. 1 at El Paso Mexican Restaurant at 6151 Richmond Highway in Alexandria.

“It was a great event,” Kelleher said. “The folks at El Paso did a fabulous job. We brought in over 100 people and introduced them to a new eating establishment. El Paso went all out, even bringing on extra staff.”