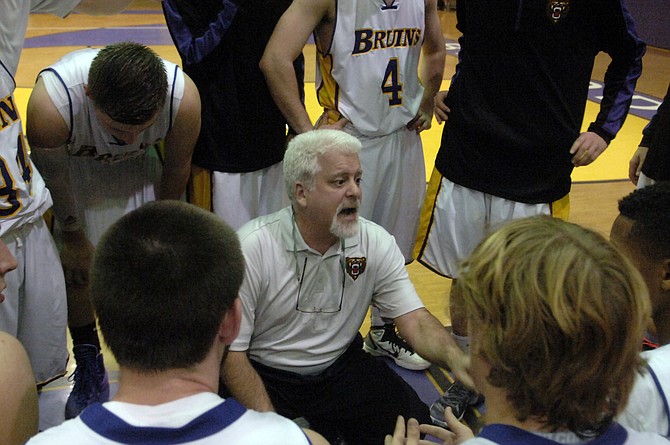 Head coach Brian Metress and the Lake Braddock boys' basketball team are off to a 4-0 start. Photo by Craig Sterbutzel. 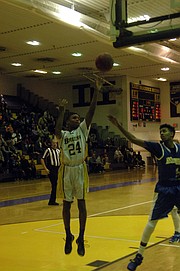 Near the end of the first quarter, James unloaded those nerves on the Rams in the form of a personal 6-0 run.

James’ trio of buckets helped Lake Braddock close the opening quarter on 14-1 run. The Bruins led by at least nine points for the remainder of the contest and improved to 4-0 with a 66-54 victory at Lake Braddock Secondary School.

James, a starter for the Bruins, finished as the team’s second-leading scorer with 12 points.

“He’s a player, now,” Lake Braddock head coach Brian Metress said. “He gets after you defensively and he’s in the passing lanes. I thought we rattled them early with the pressure. We just rattled them. And they really, early, didn’t look like they wanted to dribble. It was sort of like chum in the water --- we were going after every pass.”

“It felt amazing,” James said about scoring six straight points. “It was my first time playing in the big cross-town rivalry as a freshman so, I was a little nervous …”

Has James had to prove to Lake Braddock coaches that he belongs on the varsity level?

“We’ve known him since his seventh, eighth grade yea,” Metress said. “He’s a good player. He’s confident, he expects to play well, we expect him to play well. We don’t treat him like a freshman and we think he’s got a bright future here at Lake Braddock. … And the older guys, the captains, like [senior forward] Peyton Bishop and [senior center] James Butler, the guys who have been through the wars before, they embrace him as an important part of our team.”

James’ final field goal came with less than a minute remaining in the fourth quarter, giving Lake Braddock a 65-52 advantage.

“He’s really stepped up,” Butler said. “You can see he’s feeling more confidence as he plays. He had a great game tonight --- sort of a breakout game for him.”

While James gave the Bruins a spark, Butler took care of business as usual in the paint. The 6-foot-8 Navy signee scored a game-high 22 points, including 12 in the first quarter, and grabbed five rebounds.

“… I thought he was a beast in there,” Metress said.

Metress said he’s asking Butler to take on a leadership role this year.

“As a freshman, he was a young kid that was up on the varsity and he played limited minutes,” Metress said. “As a sophomore, he was an integral part --- a sixth man --- of a team that went to the state final four. Last year, he was the fourth- or fifth-leading scorer in the metropolitan area. This year, we’ve asked him to do something that doesn’t have anything to do with basketball: we asked him to lead and that’s what he’s doing.”

Lake Braddock opens Conference 7 play on Tuesday with a home game against T.C. Williams at 7:30 p.m. The Bruins will host Woodson on Friday.