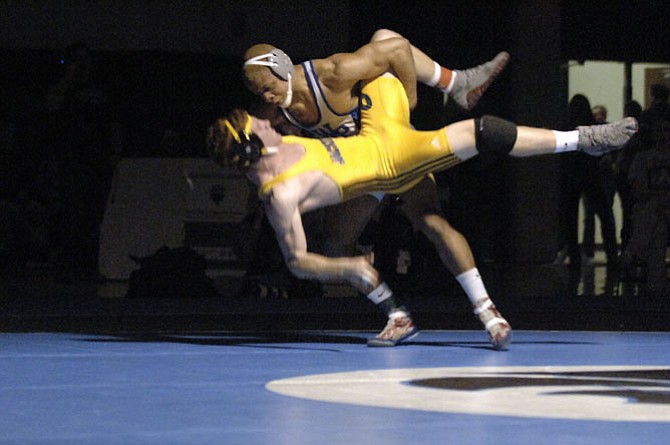 Joshua Carter was one of three West Potomac wrestlers to advance to the state meet. Photo by Craig Sterbutzel.

Carter picked up Osbourn Park’s Shane Curtis and tossed him to the mat on multiple occasions, scoring takedown after takedown en route to a 10-2 victory.

“I knew I had to come out hard; he’s a good wrestler,” said Carter, who played running back in the fall for the West Potomac football team. “... [I] came in hard, trying to get all the takedowns I can.”

Carter was one of three Wolverines to qualify for the state tournament.

A reporter interested in the performance of Centreville's Love during the 195-pound championship match decided to first interview West Potomac’s Joshua Carter before turning his attention to Love.

“He stopped the first move I tried to do,” Love said. “We got back on our feet, he took a shot and it was almost just instinct. I just kind of tossed him right to his back and then squeezed real tight and hoped for the best.”

The win was part of a dominant performance for Love, who earned Most Outstanding Wrestler for the tournament and was recognized for pinning three opponents in a combined 2 minutes, 6 seconds.

“It’s an awesome win because it’s at Centreville — the home turf,” Love said, “but ... it’s just a stepping stone to the state tournament.”

The state tournament is scheduled for Feb. 20-21 at Robinson Secondary School.